Coming back from my Azeroth vacation

So not only did it take forever to get my PS4 repaired but then i had to redownload the client, the hard drive died, then i had to redownload it again on crappy country wi-fi, yeesh!
Downside is i missed my first seasonal event, upside is it was a jumping puzzle which on a PS4 is a goddamn recipe for frustration so i cannot say i'm that bothered. It was a change however to try the new World of Warcraft expansion to compare and contrast. 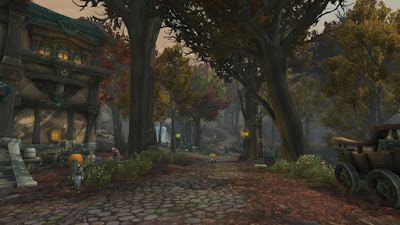 Overall Battle for Azeroth was 'fine' but really just fine. I never missed dropping the faction conflict idea when i picked up FFXIV nearly 5 years ago after Mists of Pandaria felt like the end of my interest in WoW as my main go to mmo and revisiting it now i can say my opinion hasn't changed. The questing was neat, certain elements like Wavecrest Manor almost certainly influenced by a certain Gridanian Manor house falling to ruin were a case of Blizzards infamous 'take successful ideas and make them your own' design ethos but on the whole? not a lot to do really. I outgeared most of the content that wasn't a weekly lock out and just kind of felt like the game wanted me to swap to another character after a week. Throw in crafting being something you can effectively be done with in about an hour or less depending on if you use the AH or rely on mob/node drops and that was completely uninteresting compared to the lauded crafting system in FFXIV where you actually feel like you are making something. Shame all my UI and macros were lost in the hardware failure so i gotta set that up to get back to it but you get the idea.
To sum it up i had some fun, but not enough to warrant a sub fee so i got my loremaster and pathfinder achievements in a week and considered it done. Maybe an interesting update can pull me back but i still left it feeling like FFXIV is my main MMORPG. 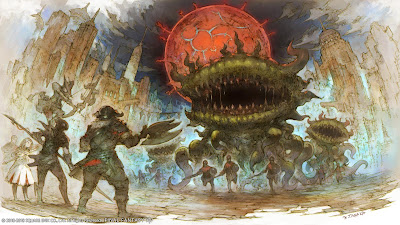 That said of course i can't say its all sunshine and roses in my 'home' MMORPG now either. Upon logging back in i discovered the Rising event was on! Fun times and a complex event right?

Sadly no. The Rising this year was a quest where you talk to 3 npcs then turn it in for a thank you cutscene starring Yoshi P. Not to sound ungrateful or disingenuous but half a decade in this is starting to go from 'touching outreach from the developers to a userbase they are grateful for the patronage of' to 'uh, yeah dude, we get it' and the lacklustre nature of the event kind of felt like one more in a tiny list of disappointments that i think are why i've been playing -and obvious writing- less about FFXIV even before my hardware issues. In short i think the game is being spread to thin right now.

Look at everything we have gotten in Stormblood and a running theme for the most part is 'more stuff than HW, but less of each option'. Less dungeons, less floors in Deep Dungeon even, less quests, less story, less content for crafter/gatherers. In short the way it feels is like the Golden Saucer: Theres lots of things to do but depending on the person each person has only a little to do. You like Triple Triad? great. But that means nothing if Lords of Verminion and Chocobo races don't interest you at all.
A lot of people argue that this is a problem because the Doma and Ala Mhigo stories should have been their own expansions and by trying to do both they split the art teams into twice the story, twice the art assetts, twice the everything, right?
I can agree to a degree. Personally? i don't think its just that, or as others said the devs running out of new ideas. If i have to point an accusatory finger at any aspect of the game that i consider a detriment right now it has to be at Eureka. 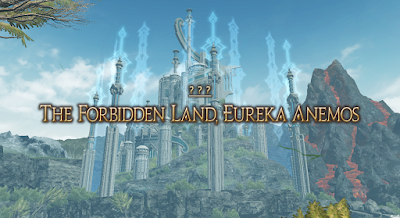 Now you should know by now that i love me some stupid grinds. I got all my Relics and Deep Dungeon weapons. Surely i should be eager for the grind right? its totally a nostalgic throwback to FFXI right? right??

Wrong. Holy shit its so wrong. Think back to playing FFXI. Using switches to open hidden doors, guessing numbers and solving riddles to open chests, exploring to see whats hidden around every nook and cranny and so on? nope. You just kill mobs on an instanced island. Thats it. I cannot stress how much this shit is not made for me.  It is soulless, hollow, mind numbingly dull. Worst of all? I think this was designed as the structural backbone of the entire expansion and if thats the case? whoo boy they messed up.
Remember me ranting about where the hell the new relic questline was? turns out its here. But its not a questline. Its farming one item. Forever. You just keep turning it in for upgrades. This is a horror show of monotony. I'm not doing X number of dungeons then X number of hunts then X number of raids. I'm killing mobs. Forever. I think i got to level 4 in its unique levelling system and straight up said 'sorry, i'm out' and never returned. To this day its had a new update with Eureka Pagos and i have never even visited it. I'm the typical 'heavy user' MMORPG player that consumes content voraciously and i simple wrote this off as redundant and not worth my time. I did Kuja 7 times instead, got my RDM weapon and that was that while my friends and people i know online were lamenting this hours of suffering where a death cost xp and reinforced this negative feedback loop. Constantly.

I know its now how everyone plays but i play MMORPG's for exploration, crafting and working with a world of players together. Not sticking in one place and farming something forever. I play these games for fun and enjoyment. Not to pay to act like a farming bot which is essentially what Eureka is in execution.

Now look at the last year of content and what if the reasons its spread so thin and numbers are dropping (last night i saw 2 people in Rhalgar's Reach and 3 in Kugane, the lowest i've ever seen in an mmo hub including current year FFXI Windurst and Bastok!) is because Eureka has been an experiment in design that was a mess behind the scenes, a mess in execution and everything outside the raid team have been hampered to facilitate this hot mess.

I know its coming back on a bitter note but hey man, if you don't love the game you leave, if you care you voice your worries right? For me this is the first time i have worried about FFXIV. I considered it totally stable, chugging along as the 2nd place sub MMORPG to WoW. But now? what few people i know that are still playing either just gear up from raids, have nothing left from crafting to do and so chase achievements or are simple still logging in to keep their virtual house. Everyone else -and im talking people that have their Encyclopaedia Eorzea and Job Stone key chains and everything- have just stopped and said 'i hope they learn from this and improve or i'm just not coming back' and all i can think is 'hope do you burn so much goodwill in a single year?'

Personally i'm still playing. I'm waiting for 4.4 where hopefully i can get back into it in a big way after the current period of trying to remember 20 odd classes hotbars, macros and subtleties again. That said i am really worrying if they are expecting Eureka to be the backbone of Stormblood that keeps players busy till 5.0 because personally? i'm never touching it again and don't know anyone personally who will either. Which is genuinely sad that this world we all love is chasing us away like that.

All we can hope for really is that the team takes notice of any significant drop off and sees what is pushing people away. If not i don't think Eorzea can stand another Calamity and neither can the dev team.

-but hey at least they reverted that bloody Awful raid loot change. Did that even last two lockouts?
Posted by Danny at 05:43