Cleaning House, too early for a 'dawn of the final day' reference Edition

So here we are. Feels like its not been that long since we were doing this in Heavensward but the time is rolling around again where its like 48 hours or less till Early Access for Shadowbringers. Which means its time to clean house! 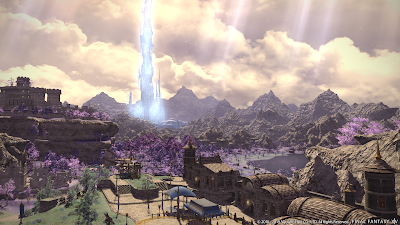 So the best reminders for players old and new are as follows:

1 - Clean out your inventory AND your Armory: If you haven't maintained this while levelling up all the jobs then you probably have an inventory full of crap. Its all precursor to levelling gear again now so you take the piece for SAM/MNK with the highest ilvl and store, sell or desynth anything below that. Do that for every gear type and every job you have. Then move on to your inventory. Have you not used something for months? then its time to store it or sell it as other things are going to replace it.

2 - The days of Main Stat Materia is over: So pack that crap up, port over to Black Brush Station in Central Thanalan and -do the quest there if you haven't- head north to the Golbin materia fusion npc to recycle all that useless Materia into stuff like Crit, Det, Direct Hit and so on for whatever your main jobs stat weights are.

3 - Dump those Moogle Tomestones: Even if like me you didn't want to grind out for Namazu earrings and owned all the mounts and stuff already there might be something you can buy to throw on the market if you earned any of these tomes. Soon they will be gone.

4 - Plan your route and log out accordingly: Are you planning to mainline the MSQ? then log out at the Scions base in Mor Dhona. Planning to jump right into Dancer? then Limsa Lominsa is your destination and Gridania for the Gunbreaker.

5 - You don't have job quests this time but Role Quest that unlock during the questing process in The First: Just so you remember not to spam teleports around the world trying to find which npc continues your job quests. They are now a level 80 'epic quest' and everything before that is new Role Quests that take place in the past and let you play as Norvrandts Warriors of Light instead to flesh out the history of The First and what lead to the Sin Eaters taking over the world. You will unlock them in the new zones during the questing experience though only one is apparently mandatory.

6 - Going Bunny or Lion? then get naked first: No this is serious and no its not just for people on Balmung. To save time and avoid queues ensure you have your Fantasia, get to a load easy area and remove your gear, pop the Fantasia and -after you are sure you are DONE done till Shadowbringers you log out. Next time you log in the expansion should be live, you select your character and change their appearance then log in and hopefully only have to deal with a login queue once. Assuming nothing goes wrong with the character creation stuff.

7 - Check the marketboards for last minute deals: People cleaning house will be dumping stuff on the market. That means you might find something that will be far less common when its rewarded from content being run less. Don't forget we have World Visit now so you can check your whole data center for people dropping their garage sale deals on the market ready for snapping up.


Its a small list but you don't want to forget and have to deal with some bullshit later right? So check off the list, check your character and heres to a (hopefully) seamless expansion launch and i'll see you in Norvrandt!
Posted by Danny at 04:52