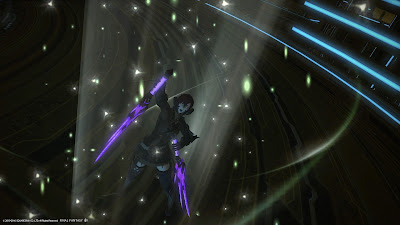 After a long slog (and a long break for Overwatch and Monster Hunter Generations, but don't tell anyone about that!) i finally completed my Ninja Anima Relic up to its current ilvl240 state. Can't say i'm that fond of the model but theres only so many ways you can make the same glowing daggers i suppose. Overall what did i think of the experience?

Honestly i hated it. I mentioned previously how the previous 'Hyperconductive' stage Relics were looking incredibly rare in the wild numbers wise and thus far i have seen a grand total of two other players who have complete the current stage of the Relic questline. Thats three in total on a medium leaning to high population realm. Not exactly in the ARR Relic numbers is it?
My assumptions then are still my reasons for disliking it now. The grind. Not the fact that it is a grind, but how you grind. Did they utilise the new dungeons? kind of in so much as forcing you to spam the roullettes each day for esoteric tomestones to buy Umbrite stones. Did they use them in the story or quests directly? No. They did not. After an early part where you specifically were told to do every post patch ARR and pre level cap HW dungeon you were never told to interact with anything specifically ever again. Just a stage of grinding to buy maguffins. Then another. Followed by another.

I'm sure you can see a pattern has developed here. A pattern that was seriously causing me to burn out. I was still doing other things in game. I got 4 crafters 50-60 and did the same for BRD, MCH and i'm working on WHM now. Still i was reaching the point i would go "okay no, you dont want to drive yourself to hate the game. Its time to take a few days playing Overwatch instead" and so i did. A couple of times.
Personally i am of the opinion that if you are having to work around a games system to stop yourself becoming sick of it there is something wrong, call me cynical. Though it helped and with some lucky Leve chest spawns i got my last 20 sands over a fortnight and got the 53 treated sands i needed to complete my Relic. Did i enjoy a third eso grind in a row? Not at all. Was it worth it? I guess?
See the thing is i do this for the quests, story, flavour and the sheer jrpg completionist aspect of it. I am not trying to power up to push some progression raiding nor do i feel i lack power in the current content. It was just a goal. A carrot on a stick and the good old "stand around in town and have beginners go "Where does THAT come from!?" feeling" again. It was something i started and it feels a waste to leave it unfinished. Especially after the millions of gil, tens of thousands of tomestones and god knows how many hours it took and stats wise yeah its a very good weapon that i am sure plenty of other Ninja players with far less free time would very much want to have. It just feels bittersweet because the whole time it feels like you are being played for a rube by the design team to keep the dungeon queue times low. Which i guess is better than my experiences as a DPS in World of Warcraft where some dungeon finder queues could last for literal hours without a queue pop. Its just a shame the flavour of it is so dull.

In my opinion they simply should have broken it up more. This stage was intended to take around 30-40 days of casual gameplay to complete. So why not 20 days of this and 20 days of another stage doing something else? Why not imitate the Trials of the Zodiac Brave books from ARR and give us a list of all the HW Hunt targets to track down? This would get us some tomes while also forming more hunting groups for other players doing their weeklies or working on the earlier tome farming steps. It would still essentially be the same thing, but by breaking it up would feel less like a monotonous slog of repetition for its variance.

Bit of a whiny moan of a critique of it i know but i am glad its over and i can focus on other things like the Palace of the Dead more. I like the daggers and will keep updating them with each new stage in the questline as the expansion goes on, though honestly i have one other relic about to reach Hyperconductive stage and quite honestly i believe it will be staying there for the duration. 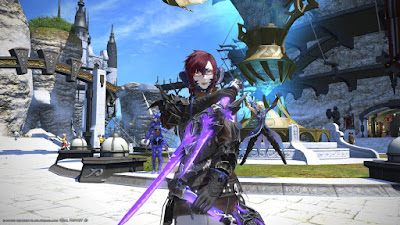 All in all i always feel these Epic weapons in an mmo that take real months on end to complete should be a memorable experience, and while thats true in a sense of 'thank god its finally over' the story and actual activities thus far have been quite forgettable compared to ARR's Relic. There is always room for change and improvement however -something this MMORPG has shown more than any other- for now though i just dont think i can recommend it based on the experience which is as much of a reward as the item.

I guess i'm just more of a journey over destination kinda guy.