The Far Edge of Fate review 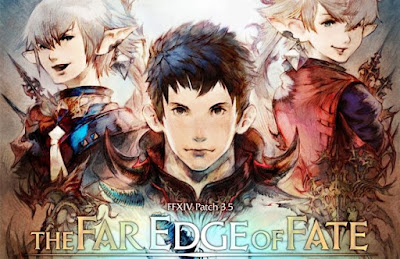 So the Christmas break is over, our Stormblood pre-orders are out and the finale of Heavensward has begun. For the first post of the new year i thought i would go over my basic thoughts on the content so far while trying to avoid spoilers -a shame that a certain main story quest title could not avoid doing the same eh?

So for story:
Main Story Quest: Honestly i can't say i was surprised this time. The Warriors of Darkness ended all too briefly but what happened and why remained a pleasant surprise. This time however i called on twitter exactly what would happen and lo and behold it was exactly what i expected. It was not bad mind you, but part of the trouble of an expansion with more set up on the horizon means a lot more blanks get filled in for the inbetween content in a way usual patches mid expansion cycle don't have.
I liked it, the story was interesting, not too much 'go talk to different npcs for 2 hours' for once and it resulted in one of the most satisfying boss fights since Ozma. However considering the trailer was name dropping the Omega Weapon and its a no show i can't help but feel a little unsatisfied. Still at least this means Omega shows up in March.

The Scholisticate: I am going to be brutally honest here. I didn't care. I just did not care about the Scholisticate. I am a lore nut. I have my Encyclopedia Eorzea next to me as i type this and i never skip quest text ever. This was the one quest line where i came real close though. The characters were so bland i could sincerely not tell some of them apart, the story across the patches felt like a waste of dev time and on the whole it felt like doing it just for completionists sake.
That said the actual final quest and the reveal of what the scholisticate was and more history of the dark past of Ishgard actually ended up being one of the most interesting bits of lore for the patch. Considering i had written off Ishgard as 'done now, off to Stormblood set up content!' i really did not expect one of the most interesting moments/reveals of the patch. Still on the whole not especially interesting.

Hildebrand: Honestly this was brief, cliche but ultimately fun stuff. It was a different side to the character and Gigi was a nice reference to one of my favourite FF games. The storyline started weak in 3.1 but on the whole it was a nice send off and i eagerly await more in Stormblood.

The Warring Triad: Zurvan was a joke. I'm sorry but Sophia should have been the finale not 'generic monster with generic adds'. Disappointing boss fight aside it was interesting to get our young assistants backstory reveal even if it did feel like something more Kingdom Hearts then Final Fantasy. Regulus was more General Leo than the Kefka people expected but on the whole was a character i wish we got more of. Not a huge finale but its a better side story than a lot of the Ascian stuff near the end of ARR.

Beast Tribes Finale: It was a silly, charming send off with some neat rewards. That did not surprise me. What DID was that nobody i know has done it. Because not one of them finished any of the Beast Tribes in HW up to rank 8. Vanu and Gnath i could understand but i really am surprised how few did not use the huge boost in xp and gil the Moogle quests rewarded you. Honestly i would not be surprised if by 5.0 we have a pve beast tribe just because and a crafting beast tribe as the main focus for a small niche and it gets regarded as a bit of a failed experiment with increasing diminishing returns on their dev resources spent on them.
Still it was nice to be reminded that in some places we are leaving Ishgard and Dravania in a better state than we left it.

Dun Scathe: Hard to talk about without spoiling the ending to the raid but on the whole it was great. No Ozma style really high point but for the final raid of the expansion we got a pretty satisfying final boss and i really hope we don't just see the Sky Pirates as the intro to the new Diadem. I would love if they are part of the next Relic quest and aiding us in exploring Eureka the Forbidden land. Great raid, little easy when you get the small list of abilities down but visually fantastic and the lore implications of 'Hollow' Voidsent gets the mind racing, especially after the triads reveal of what voidsent are to begin with.

All in all a mixed bag but nothing i hated. So now theres the new timesinks. 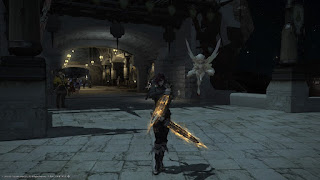 Anima: I ran 100 A1 Savage party finder runs for 2 hours a day over 3 days. I got my ilvl270 Relic and got to work on my DRK's Umbrite step. An extremely easy light step. Possible the easiest step for the entire chain really. So naturally i fear the final step coming in the next update. 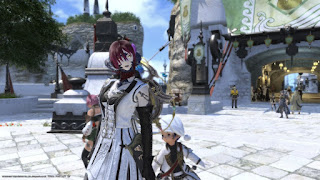 Garo PvP event: That went live? you might ask. Because it has no quests right? well there aren't any. Go to the Wolves Den for a new NPC. All you do is spam Frontlines and the Feast, buy a full class set and weapon and talk to her. You now have a title to equip and use in pvp. 10 Frontlines wins gets a mount, 30 Feast wins gets the second and a total of 60 wins in total in anything gets the third.
Honestly the combination of this and Frontlines Freelancer options has revitalised PvP to the extreme. Ques are near instant. Matches are much more even and everyone is rolling in marks and some of the new sets look fantastic. My only complaint is A: no reward for getting all the sets like the Youkai but its around for 6 months and B: can't store it in the inn and 7 pieces for 13 jobs is a LOT of retainer space nobody has 3 years in! Roll on the inventory expansion come Stormblood.

New Dungeons: This is just straight up night and day. Baelsar's Wall is excellent. Neat mechanics, cool set pieces and the finale boss is easily the best dungeon boss fight in the expansion to my mind. Satisfying to fight and a real test of reflexes. I imagine on keyboard and mouse some of the sequences could be a bit of a nightmare for the more casual player.
Then you have Sohm Al Hard Mode. AKA "Heres some Snowcloak style teasing of models in the upcoming expansion, have fun!" only its hard to have fun when you have a dungeon more boring than Neverreap. The final boss is 'okay' and just okay. Everything else is mindless. Its a loot pinata to let people gear up in the new metal gear looking Fillibuster sets and just feels so uninspired bar the final volcanic cavern stretch. Really disappointing honestly.
So one great new dungeon one not so great. New dungeon set is really cool looking for most classes and the music and art is superb. However i cannot see them really being something people are excited to run 3 months from now. Feels like Neverreap and Keeper of the Lake all over again in that regard.


So thats my brief reaction to the content. I'm working on pvp sets, some alt relics and tweaking my NIN best in slot gear for the expansion. On the whole a very fun variety of content but story wise it really feels like they kept my most wanted points for the second half of the patch coming after fanfest. So at least i have something exciting to look forward to next month after fanfest and the totally not happening reveal of Samurai.