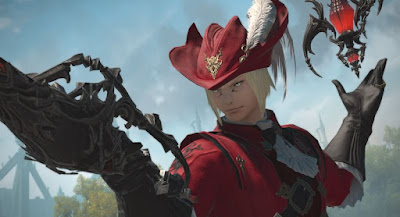 Eighteen days to go till the release of Stormblood, two weeks for early access to boot. This means the media campaign is moving into full swing and the first big reveal has been a number of websites and youtuber's being invited to SE to test the 4.0 builds of all the jobs and the changes that are coming to each class. Naturally this has some players overjoyed, others saying this is it the game is ruined forever. Change is not something the mmorpg player craves more often than not but as is the nature of a persistent game change is inevitably going to happen. So i'm just posting a quick rundown of all the jobs and my thoughts since a full ramble about each would take pages of test to get out :p

So starting with my favourites:

Ninja - is my main job and thankfully its seeing no big shakeups. As i predicted they are streamlining some of the armour crush style abilities but other than that sneak attack and poisons are the only notable loss in the NIN skillset. These spaces on the crossbar are being taken up by new skills that focus more on the 'ninjutsu=ninja magic' idea like the new ten-jin-chi ability that makes Jutsu more than just a rotational filler/upkeep buff so overall it looks like i'm not going to be relearning the job and i don't particularly have any complaints.

Dark Knight - Unsurprisingly they are trying to nerf the button bloat, theres been some slight nerfs and the changes to Darkside are interesting but again beyond that i dont feel like one of my main jobs is getting some massive overhaul and dont think i'll struggle to adapt.

Astrologian - Can easily be summed up as "the same, but cooler" with abilities like drawing 4 cards, cleric stance becoming a cooldown, way higher regen/potency, sleeve draw and the lord/lady adds more tarot deck flavour i already love to the job. Honestly it just looks like more fun from the same job and i really have no worries or complaints about this one at all

Red Mage - The standout for the two new jobs i am actually interested in playing. So far it looks neat. Building white and black meters to dash in and fence then dash out with a holy or flare finisher. My only worry is this will turn out to just be another umbral/astral ice/fire balancing of BLM in another skin and personally -and BLM was my main job for ARR- i got tier of that real quick.

Favourites aside the rest i need playtime with. PLD finally seems to be getting some love and BRD might be really fun in 4.0 But then there are things like WHM that look, for lack of a better term redundant and a lot of SMN players are unhappy with the nerfs even if the Bahamut summon looks rad.
Naturally i'll expand on them with hands on experience in a few weeks but for the jobs i play and the new one i have interest in i can't say i have complaints overall. The big question is will i finally be interested in jobs like MNK or DRG that i got to 60 but never really had interest in playing in the longrun.

Times gonna tell i guess.
Posted by Danny at 04:05