A Realm Reborn and the End of an Era 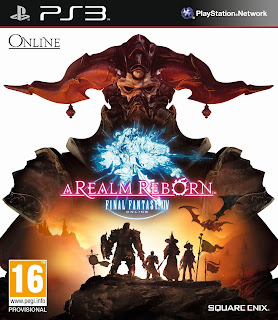 Here it is. The day before servers go down for the 4.0 24 hour maintenance. Which means that this is the final 24 hours of life for the Playstation 3 client for Final Fantasy XIV. It feels like its come so fast, i played on pc but the PS3 beta was actually what sold me on the games rerelease after the initial reputation put me off like so many others.
Its a bit strange to look at my shelves of games and in the Final Fantasy section my FFXI discs are all fine and can be used for the same game i played almost 14 years ago yet these ARR discs i bought what feels like only recently but was already a good 2 or 3 years ago at this point are useless for any purpose beyond collecting's sake or should i desperately need a good drinks coaster. Yet its happening tomorrow. The PS3 players that lived through the calamity of Bahamut and the fall of Dalamund now have their very real final day ahead of them tomorrow. Thats such a rare thing for mainstream games but there are people that cannot afford a PS4 or a gaming PC so for them this is sadly the end of Final Fantasy XIV.

Its not as though it wasn't needed though, thats really the saddest part. The previous console generation lasted so long that the hardware is roughly 12 or more years out of date. The game chugged along at the best of times but in heavensward it was a nightmare i played through for the first few months before i got a PS4. Void Ark crashed the client, zone transitions loaded so long that you would get a DC for being inbetween areas too long and Alexander hard locked the whole console to name just a few issues. King Behemoth and Odin was an infuriating exercise in watching players models pop in attacking something you could not see or target and it was over a year between King Behemoth Spawns on a couple of servers. That was a horrible state of affairs.
But for all its problems i made it through it all. Beat Coil, got all my classes to 50 and so on. I platinum'ed the game essentially 'beating' ARR such as you can and i can't imagine how many hours i put in as this poorly running PS3 client replaced World of Warcraft as my MMORPG of choice. I had a good time and my memories of the experience overall remain fond ones.

But they are just memories as tomorrow this version of the game dies and of course 4.0 means so many other little things are changing with it. You can make a pun about a 'storm on the horizon' but i feel sorry for the people being left behind. Surely there are some casual players who have no idea about Stormblood, let alone that after tomorrow their discs simply will not work. They will just wake up to find the game they love is over. For them at least.

Its a reminder no game lasts forever and online games are all the more often a victim to sinking without a trace.

So enjoy it while you got it folks, and feel sorry for the Warriors of Light we leave behind who no longer can.
Posted by Danny at 10:04