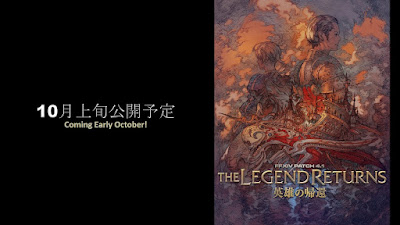 So heres a thing.

I was honestly taking a break just to wait till 4.1 hit. Write up a take on the whole 4.0 experience from launch day to its update to sum up my thoughts on the 'base' story and experience of stormblood.

Buuuut as a huge Ivalice fan i really had to put this up in the interim. The latest Live Letter has gone live and man did we get some stuff to talk about.

So coming October 10th 'The Legend Returns' is the first big content update to FFXIV's Stormblood expansion and it appears to be the 'give something for everybody' patch games like World of Warcraft have failed to pull off for years. No matter what your focus in game there is something for you, 'course this means there might not be enough of certain niche's but there isn't going to be anyone left going "but i have nothing to do in this patch!" which for MMORPG's is super rare.

So lets do the rundown:

Glamour will unlock at lvl.15 and not lvl.50 - Not a huge change in the grand scheme of things but for convenience, quality and life and letting beginners have more to do this is a great change. It sucks to get some really ugly gear and be stuck for hours. Especially if you bought a few months gametime or took part in an event for lvl.1 cosmetic gear with no stats that you simply cannot use until ARR's endgame. Now everyone can clownsuit and slutglamour, viva choice!

Royal Menagerie Extreme Mode - You know who is getting the Thordin treatment and i think everyone was expecting this and i look forward to the fight. God knows over two months of just Lakshmi and Susanoo was getting real tired.

Bards can perform music with notes on a hotbar - Now i know the LOTRO crowd are perking their ears up at this one. I fully expect the 'jazz for your soul' lalafell videos and post wipe respawns having an 'ooo watchu saaaaayyy' macro at the ready in alliance raids. Another example of the devs doing things neat that most studios would consider a waste of resources. But i'm sure the A Stage Reborn people are freaking out right now.

New Hildibrand and beast tribe quests - Side content is always good and hildibrand and more ease for levelling alts all the more so. Given the nature of the Kojin i would imagine this may be our moogle equivalent for crafters which right now have Leves and little else to do.

New Dungeon: The Drowned City of Skalla - A new dungeon set in a sunken city. Perhaps in the Ruby Sea? or maybe another Sirensong Sea style dungeon out in the ocean? maybe its on the way to a new location? people have been eyeing Thavnair for ages and they do have a consulate in Kugane.

Alliance Raids added to a new Alliance Roulette and party member size limit removed for 3.X content - Not much to say about this you can't already infer. An alliance roullette is a good way to keep the numbers up for people still doing the storylines or farming glamour gear and gives everyone more rewards and things to do. Not terribly exciting but a welcome change.

The Lost Canals of Uznair - Further exploration to deeper canals can be accessed by finding another map inside the instance. Perhaps this is a little more Deep Dungeon than just another Aquapolis like folks assumed?

Adventure Squadrons update - Not the most cheered for update but your squads level cap has increased, you can glamour their gear and they have new dungeon missions to run. Hopefully with rewards that make it worth actually doing after you unlock your Grand Company Promotion this time around.

Expanded Cross World systems - Now including Raids, Custom PVP matches, Friend lists and tells. Hopefully tells doesnt mean the Gil Spammer containment isnt broken and we get everyones spam at the same time. Beyond that playing with your friends even if you are on different servers is always a good thing as long as the server community doesnt die. We will have to wait and see on this one.

New higher Raid Difficulty - Ultimate - Starting with Ultimate Coil, maybe its Neo Bahamut this time around? we are getting that post savage raid content the hardcore crowd wanted. Ultimate Ozma when? 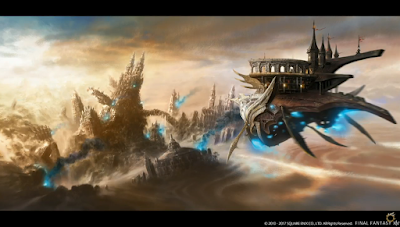 So there may be some players to young to remember, or simply didnt play games at the time, to know there was a series of Final Fantasy games that were not stand alone self contained universes. Including title's like FF Tactics, War of the Lions, Tactics Advance, Vagrant Story, FF12, Revenant Wings and more eventually this series of games all set in the same world albeit in some cases centuries apart was known as "The Ivalice Alliance". Unlike other attempts to make a sub series like 'Project Fabula Nova Crsytalis' however this did not fall through. It never really lead to insane sales like the main series games but on the whole the world of Ivalice is easily the most fleshed out Final Fantasy world other than Eorzea and Vanadiel.
And now we are going there, only things like a bit more 'Dark Souls 3' than we remember. Written by Tactics creator and 'father of the series' Yamui Matsuno this is the next 'Crystal Tower' or 'Void Ark' 24 man storyline for this expansion. So expect revisiting this place a lot on alts and when grinding the new maguffins for your 4.0 relics.
Not much on the story right now but knowing XIV its either going to be one of the other worlds getting ready to collapse into void, a storybook ala FFTA or an Alt Ivalice native to Eorzea from a pre calamity age. Our last main villain was listed as 'having trained as a Samurai in Rabanastre' after all.


There are still more tidbits coming in as translators work their butts off to get through a wealth of infodumps but on the whole im ready for new content and have been for maybe a month even. Plus i just really, really hope Ivalice gives us some Vagrant Story love. Of all the Ivalice games its the one that needs a little love the most.

So start counting down kids. Just a mont to go!