What a year its been for videogames. I have been swamped. I've logged into FFXIV on patch days, done my content and jumped back out. From Persona 5 to Xenoblade Chronicles 2 not a week has gone by where i haven't had something to do. Yet i've had this nagging feeling i've left FFXIV by the wayside the last month or so. Personally? i think it has to do with the Relic.

Anyone who's seen the census numbers has seen a staggering player dropoff rate for Stormblood compared to Heavensward and you gotta ask why right? Great dungeons. Fun events. New things to chase and zones to dick around in. So whats missing? what carrot isn't there for players?


Maybe a lack of Deep Dungeon isn't helping. God knows going "i've got to get ALL these jobs AND two new ones back to cap again?!?" won't help but nothing kept folks i know playing in HW like the Anima Relic.
Sure we bitched and moaned about grind elements. Its a cathartic thing for an MMORPG player right? but it was something to do and more importantly something to chase. An increase in player power, a flashy model to show off to let other players know 'yeah i did the thing' and right now? everyones using the same gear and weapons and nobody has a reason to log in beyond slightly higher numbers in Ultimate. 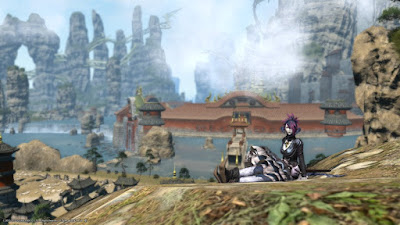 In a year of amazing games to play this is not a healthy thing. It happens to a lot of MMORPGs but usually the cold months are the big playtime period yet here we are with most regions having their active player numbers drop by over 60% and i honestly believe its the lack of a carrot in the Relic and Eureka which is still in a "will we ever hear about it?" state which is giving me Diadem flashbacks.

I'm still logging in to get up some easy levels on my last few classes in bursts but without the chase the rpg kind of loses out to the mmo and for Final Fantasy of all things thats kind of making me nostalgic for the days of farming maguffins for tomes in Idyllshire again.