I've finally gotten around to maxing all my crafting and gathering jobs. All the quests done and back to the more comfortable state of one set of gear for both roles which makes things much easier on my Armoury Inventory.

Overall its an interesting difference compared to the far more time consuming and expensive levelling content of Heavensward. Clearly they want crafting to be a lot easier. To get to the cap at least that is.
Instead of relying on Beast Tribe Dailies -at the time of writing there are none for none combat classes in Stormblood yet- or having to farm items to craft complex recipes from your growing repertoire you are given 4 quests to make one item from one maguffin they give you. Still got the macro i posted back in 2016? great. If you have the best gear for your level from the vendor in Kugane you hit those two buttons, turn in the quest and jobs done. With leves doing the filler in between. Meaning if you have the gil to burn you can just go to the marketboard and for some jobs like Weaver never leave Kugane and go from 60-70 in minutes. Only the actual speed of taking and turning in leves holding you back.
So yeah. Nerfed isn't the word here. Not that i'm complaining when its a cumulative 540 levels for crafters alone nowadays. Did i hate it? no but i wouldn't call it satisfying either.


So where does the title come in here? well its time to talk about Crystals, Clusters and farming. Everything you make in the game takes Crystals. I mean it IS Final Fantasy after all so its not surprising right? You grab your Miner and go farm them one by one for dozens of hours to stop running out across those 540 levels, right?
Of course you don't. Sadly i've noticed recently that not everyone knows this. So its time to talk about one of the games myriad subsystems a lot of folks don't seem to know about: Aetherial Reduction. 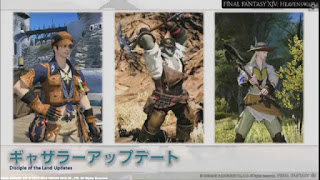 What is it? well its essentially desynthing collectibles. What are collectibles? well during Heavensward levelling a new system was added to use a 'collectors glove' ability to mine, fish, harvest or craft and item not as the item per say but a rated token version. It cannot be used but can only be turned in to an npc. Unlike the Ixal tribe or the Grand Company turn ins however these will only be accepted if the rating is at a certain cap. For example the lowest Stormblood Mining item -Molybdenum Ore- needs a rating of 470 collectibility or higher. Higher the rating the more 'scrip' tokens you get in return. These can be used to buy gear and items beneficial for none combat jobs after vendors offering no more improvements for Gil.
However mid HW they also added a new system for the players asking "theres nothing left to buy with Scrips, so whats the point of collectibles?" and the easiest answer was 'for making money!'

So on paper its pretty simple. Check online for the spawn dates for 'Ephemeral Nodes'. These are the nodes that only spawn for a small, set period of time per in game day. Different ones in different zones but the mechanic is the same. Instead of Blue or Gold a Brown node icon appears on your map. Usually offering stone or herbs that when mined don't appear to have any in game use at all. What you want to do is hit that collectors glove buff, have 600 gp and a higher set of gathering stats and use a rotation like the following -though as gear improves there are others- to get a high rated collectible. 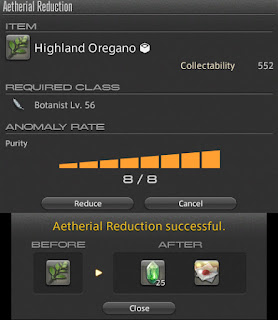 Now you have your collectible. Next you need to check your ability list for 'Aetherial Reduction' and add it to your hotbar. Simply hit it to open a window that will show any ephemeral node collectibles -don't worry it doesn't mix your scrip collectibles in- and simply go through your goods and break them down. This will net you hundreds of Crystals and dozens of Crystal Clusters.

In the longrun this is a good source of Gil since there is always a demand from crafters who either don't know about this or cannot be bothered to do it themselves and in the short term this is a way to save gil by not having to buy yourself while getting all 8 crafters from 1-70. Ensuring you have more Gil left over to start getting Materia and some crafter gear to start getting into the true endgame of Yellow scrips and supplying endgame players with rare goods.

So get out there and start Gathering Adventurers!
Posted by Danny at 05:44