The Sigmascape in review

Boy was i excited for this one as a big FFVI fan. Just like Ozma in Heavensward i have once again not been disappointed. Which was a nice surprise after i honestly did not care for Deltascape at all. Choice of bosses, style of fights -the gravity manipulation fight in particular was so one note and dull- but also in theme. Conversely here we have something that felt far more faithful to the tone of the game it was lifting from instead of just 'HEY REMEMBER THESE!?' which i find always reeks of lazy design choices when its something from an earlier game but not matching the 'real' versions tone. It was a big nitpick i had with games like Dark Souls 3 that were at times overly reliant on predecessors to name a particularly egregious example.
This time though? i dug it. I enjoyed myself and found myself going 'oh man thats cool' a fair few times as new mechanics appeared instead of just reskins of primal or coil boss abilities showed up. I think its a little easier than Deltascape but that could also be after multiple patches to balance jobs and let people do the numbers on the jobs -though its odd i have not seen one SAM in Sigmascape thus far but multiples of everything else. Personally i'm not 'done' so to speak with crafting and gathering and working on pve jobs again but still stuck to RDM for this raid. In PUG's (pick up groups) i have found self healing and -more importantly- the combination of Swiftcast and a res invaluable since no bloody SMN players seem to remember they can do it nowadays. So bare in mind this is the opinion of a ranged dps with self heals and a res that saved peoples bacon far more often than i expected as i talk about the fights. 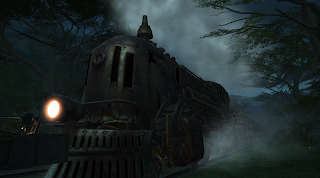 Boss #1- The Phantom Train/Ghost Train:
So i have to admit i am predisposed to love this fight. The original in FFVI is easily one of my favourite moments in that game and the series. The use of different layers of Paralax Scrolling as this rusty old train packed with Ghosts rolled through the foggy woodlands in the Doman Countryside was mindblowing back on the SNES or even later on the PS1 as an example of sprite art at its best. The music, the mood and the fight ending in something Godbert Manderville would be proud of made it a great moment in Final Fantasy history. So when i see the train rendered on PS4 in full 3D with the same spooky music fading into the FFVI theme as you ride through those same foggy woods i had a huge grin on my face. That said this is easily the most easy to beat raid fight in FFXIV since maybe ADS in the First Binding Coil or Oppressor in Alexander. You use light to purify ghosts, avoid aoes and thats really as hard as it gets. It reuses the Alex idea of separating players for a small dps race against a ghost which was visually really neat but again very simple. It is a fight that is mostly just pure fan service. Its easy but if you love the original it pays homage to then its also extremely enjoyable. 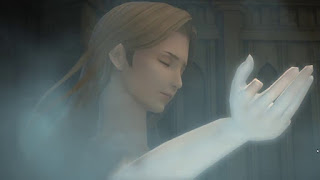 Boss #2 - Chaddarnook, Demon of the Painting: Talk about a step up in mechanics. This is one of those fights like Ifrit Extreme where you know some PUG's will find someone screaming "God dammit no, listen! you cannot skip X mechanic or we wipe!" where you simply cannot go in blind and brute force it.
Like Catastrophe in Deltascape or the Vrill mechanic in Lakshmi this is a 'keep your mouse/touchpad on the extra button fight' where you bring paintings to life in a Reverse of a certain P5 fight to generate counters to the abilities Caddarnook is granted by possessing certain paintings. It is a step up in raid awareness -as i think the second should be after the dps check of the first in most raids- and while visually i wasn't a fan it keeps you on your toes and moving. There is always something to watch out for so you cannot 'go tunnel vision' and just go through the motions of your rotation and hope the group can power through damage. You simply can't and boy did i have to cast a lot of Verraise in this one. Much to the healers exasperated thanks. Great boss in terms of mechanics and difficulty but visually its a dude in a robe and thats kind of bleh. 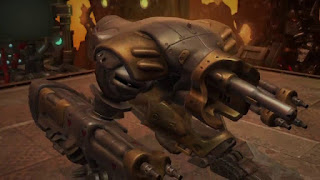 Boss #3 - The Guardian: Now personally i found this much easier but i think that could honestly be because the mechanics of Chaddarnook are just much less well explained than Guardians.
It has a monitor behind it that shows what FFVI monster its about to use the ability of and/or summon. There are new mechanics like tracking missiles, bomb defusal and so on but because its so clearly explained then its kind of a breeze to actually get through. The boss itself is a generic-ish magitek walker and its mechanics are simple and well explained through gameplay. It is a fair, competant boss but ultimately forgettable and thus far is maybe one of the weakest bosses in Stormblood interms of staying power after the instance is complete. Not great, not bad. Just very vanilla 'MMORPG raid boss' in every respect. It gets the job done but never excels at anything of note. 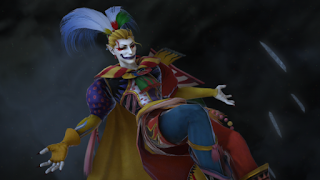 Boss #4 - Kefka: and here we get to the boss everybody was most interested in. Kefka Palazzo. Not unlike certain characters we have already encountered in FFXIV he was a high ranking general for the Empire that destroyed Doma in FFVI. But he was bloodthirsty and took malicious joy in the suffering of others and ultimately turned on not just his emperor but the entire world. Ascending to godhood and remaking the world into the 'World of Ruin' that made up the games second overworld map. So how do you make that into a raid boss? basically the same way they did with Ozma. What is it? what is their nature? what are their abilities? now lets ignore their original boss fight and make an mmo fight around that instead!
Kefka is a liar, a cheat and a bad comedian. The fight reflects this and gets across his character while at the same time does kind of downplay his actual scale and scope in much the same way X Death was treated in Deltascape. Its not terrible mind you. Seeing a certain giant pillar from FFVI rise up around the arena was great but ultimately there are very few interesting mechanics beyond 'if the aoe mark as ? in it then you get IN rather than OUT of it. Beyond that you look away from the tower when it does its gaze or look at it if its yellow. Its trying things that might be novel if we hadn't just had something basically identical with the final boss of Rabanastre in the last patch. Don't get me wrong the fight is an excellent encounter and is much more enjoyable than X Death in my opinion. It just feels like it could have been Ozma 2.0 and instead we just got a mix of 2 or 3 primal fights in the same patch we have a dungeon boss that is literally a mix of 3 primal abilities.
It just feels like a good fight that would be far more impressive if it came out before all the things that in hindsight were probably testing the abilities he uses in the previous patch. Its just a bit of a shame one of the biggest villains in the series gets just a "solid 7.10" experience for his fight. That said i still can't wait to do it on my next lockout so thats really what matters in a persist, repeatable structure of content i suppose.

All in all i think Sigmascape is a bit of a mixed bag. Its never bad i will give it that and when its good its great. Its just not the slamdunk i feel it could have been and thats a bit of a downer. I still enjoy it more than Deltascape mind you. So its easily a step in the right direction for me. I just worry a bit about whats next. A lot of people are expecting Sephiroth or Ultemicia as the next 'scapes final boss and how do you make either of those into some kind of fun fight without turning them into just X Death again?
Its again just my opinion but i feel the final bosses of each tier should feel less like another raid boss on a ride and more like a hard/extreme primal interrupting the flow. They are the end. For a tier at least. You should be challenged by them to a degree even in the normal mode and my big complaint for Omega's raid across all 8 fights is that it doesn't feel like the events match the gravity of the story its trying to tell whereas Alexander -love or hate some of the fights- really did feel like a complete experience rather than a 'greatest hits' of Final Fantasy in a Dragonball Super style bland tournament setting.

I know thats ending on a bit of a downer and i did like what happened at the end of this tier of raid content with Midgardsormer but it just feels like another side story raid like Void Ark rather than the next Coil/Alex and we already have the honestly more interesting Ivalice storyline for that so for now at least Omega just feels a little inconsequential and disconnected from the world proper and i hoped this tier would remedy that somewhat.

Question now of course is 'how many tiers left?' because Yoshi is being pretty coy about how many content patches Stormblood is planned to have. Its the beginnings of Spring 2018 and still no Eurea, still no Relic, still no story resolution in sight. We don't know what will be our Nidhogg this expansion, what our endgame circa final patch will be. We only just got a hint at what this expansions 'rebuilding settlement' will be in Doma and it feels at this rate as though maybe theres not one but two or three more tiers left in this and maybe that can make me care about the story more?