4.56 The conclusion of the Stormblood Story

aaaaand its finished already. Did you blink? you may have missed it then. I kid but i logged in, got the 'put time aside for this' message and was expecting another ARR/HW 2+ hour deal. Instead we get two solo duty fights and a little bit of exposition and then credits. Unsurprisingly this left people a little down going "was that it?" but honestly i was expecting this considering the nature of the ending this time.
Spoilers for those who didn't attend or watch the JP fan fest stream -which i will be writing about after this post- but Shadowbringers begins with our character using something related to the Crystal Tower to make the jump to another of the shard worlds created by Hydaelyn, the First in fact. So no long trip running from Uldah to Ishgard on the lamb, no waiting for the Ala Mihgan resistance and the whole Shinryu deal to go down. We are going in direct continuity from the end of Stormblood where we wake up in Ishgards Chirugeon's ward to grouping up with the Scions at Rising Stones to go find the way to the First. I'm sure in the future when its not during the awkward waiting period it will flow well and have a sense of immediacy to the urgency. You finally get a lead on whats been afflicting the other Scions and its time to jump on it and continue trying to solve the mystery! For now? we wait. Finish off levelling jobs, clear Eureka if you want, do the side quests and the FFXV tie in event when it hits. We still have stuff to do but for a story heavy game like a mainline Final Fantasy it is going to leave some people feeling like the waiting period came too quick. Personally i found it short, but i understand why.

As for the MSQ itself? well no shocks here we beat up Elidibus/Ze-not just like in the Shadowbringers trailer but then that creepy Echoe like effect occurs mid battle and strikes you down. Before you can be killed by "Zenos" however you black out. When your character wakes up you are greeting to a scene right out of kingdom hearts including an appearance by a character whos design may as well come from there as well. A hooded man with a crystallised arm tells you that oblivion is coming wether you win or lose the war with Garlemald and the only path to salvation is through him. He has left a 'Beacon' at the Crystal Tower for you to find. You wake in Ishgard to be informed by Ser Amyeric that Estinien showed up to save you, which we get shown in a single still image which honestly seemed a little lazy, and then you return to the Rising Stones where Tataru and the gang welcome you and set off to the Crystal Tower to find this Beacon and 'Open the Gate' to the First.

What do you mean "and thats it?" well mostly. There is a final scene back in the throne room in Garlemald. The emperor, those suspicious as hell twin bodyguards we fought in the last dungeon and Zenos are there alone. An uprising of sorts is starting due to the rumours of a demon possessing the heir to the thrones body and the Emperor "will not fight for the throne a second time". They also mention that curiously Solus, scene chewer de jour, is absent with neither the Emperor nor the Ascian knowing where he is and assuming he is 'using this chaos as an opportunity for his own ends'. The scene ends with the chief scientist making a return to confirm the Black Rose is ready to begin production again. Ending with a strange fade to black and static close up on a manic Emperor reminiscent of Kefka and Spehiroth to a lesser degree. Wether this was to show his internal, hidden feelings or to suggest some form of mania or possibly even some form of multiple personality syndrome we can't say for sure but it was a bit of a jarring shot to end the expansion on as the very, very long credits roll for a good 20+ minutes after this shot.

Finally for the after credits we see Zenos aka 'EleZenos' cut down a Garlemald soldier and look at the flag nearby to state it is "time to reclaim what is rightfully mine", his body or the throne or both we don't know while lamenting that he missed meeting "his friend" again and hopes we "grow more savage" on our jaunt on another world. Finally our character stands on a hill and stares up at the Crystal Tower and a closing comment of "Sow the Seeds of darkness" marks the end of Stormblood, along with Tataru giving you the most Edgelord outfit for a none DRK player since the Void Ark raid gear sets were the in thing. 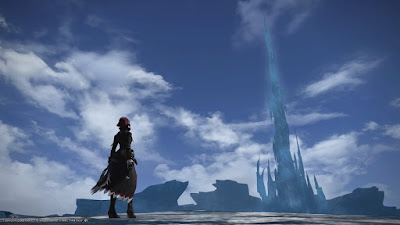 Combined with the events of 4.5 i mentioned a little while ago my overall opinion remains the same. I am interesting in where its going, i find the increasingly cartoony jumps to make the Emperor evil shallow and a bit of a bruteforcing that wasn't needed. I'm glad we didn't get a character death just for dramas sake as i was honestly expecting them to try another Hauchefant with Hien at the end but thankfully they avoided that one.
So all in all the main story quest of Stormblood was fine. Not exceptional, not emotional like Heavensward was to a lot of people but just fine. Not quite the usual standard we expect from the team overall but i've said many times that trying to fit two major stories into one really seems like its been a detriment from the outside looking in. The characters were likeable and the world building was great but i would be lying if the minor trip back to Ishgard to see the Heavensward characters wasn't much more impactful than anything related to the current story, for me at least.

Beyond the main quest we have the Beast tribe finale, the Hildibrand Finale and the associated Trial to round off the expansions wrap up phase. The Beast Tribe questline involves Hancock inviting the Ananta to Kugane, no doubt for some kind of trade deal, with you dragged along to be a tour guide of sorts but naturally for this series a familiar face shows up to ruin everything. You know the drill. Its a greatest hits victory lap, though in this case the animation kind of outdoes the MSQ finale honestly.
Then we have the finale of a certain Manderville Man's latest investigation. To this point i have felt like Hildibrand has kind of been on a declining level of entertainment since A Realm Reborn. I still get the odd chuckle but you can tell this was something they wanted to do once and it was just so popular, which is understandable, that they are not feeling forced into doing it and it kind of shows at times. This time around the culmination of the questline honestly feels longer than the MSQ did for this half of the update. The Yojimbo trial was fun, effectively a remix of two earlier trials but felt like it was over very fast compared to the other trial fights this expansion. Story wise i got some laughs out of it and overall i think this storyline held up better than the GiGi storyline of Heavensward which felt like late in Development they decided to rush a Hildebrand questline out because they noticed how popular he became during A Realm Reborn. This time around it felt a bit more planned out and varied plus it gave us more time in Kugane which adds to it overall and its a shame we didn't get more stuff in Rahlgrs Reach the same way as the expansion went on. But some Thavnair interaction was neat and the ending to it was a real "oooh, thats how they are setting the next one up" moment that was a nice nod back to FFV.

Overall it was a brief maybe 4 hours of new gameplay content but with the expansion over its really just tying up loose ends at this point. It still feels like Ultima was the finale of the expansion and this is just set up with little actual shock value compared to things like Nanamo and Papalymo's events in the past.

But i guess thats Stormblood over and done. Still got one more job to get from 60 to 70 and some cleaning house on a couple of side things before i call it all done and dusted and give it a write up but hey we still have the FFXV event to go before we are truly done with Stormblood so still a little to go before we are waiting around for Shadowbringers eh?
Posted by Danny at 15:11