The Man in Black drove across Thanalan, and the Machinist Followed

Hey so points for trying to make that work at least right? no? alrighty then. A swing and a Miss. Now here is an event that i'm pleased to say held up. A lot of the events in XIV during Stormblood has been pretty lacklustre and while this one is pretty late for its intended cross over with a game from two years ago its still been a fun event. Its been a long time since i took multiple screenshots and recorded video to remember the event. 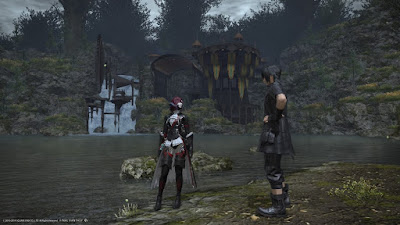 First off you can breath a sigh of relief. This is not just another dull Fate grind like Lightnings was. There is a fate where you fight Magitek Troops -or MT's- but you need do to it 3 times tops, it takes like 30 seconds to beat and nets you a currency to buy 6 Orchestrion rolls of what most would agree are the best tracks from the FFXV soundtrack. After that? shockingly its a short but enjoyable single player questline instead!

The story was simple enough. The Warrior of Light runs into a certain Lucian Prince broken down at the side of the road in Thanalan and introduces him to Cid -but not the Cid Noctis is expecting of course- to repair the Regalia. In the meantime you and Noctis investigate reports of things from Eos invading Eorzea. At first its just Magitek from Niffleheim but as nightfalls you get the first solo duty fight against a Demon, Eos' version of Voidsent for those who havent' played FFXV. Its a simple fight is smoked as RDM but tried again as BLU and while it took a little longer was still pretty easy but it was fun. After that you go camping and fishing as Noctis explores the shroud looking for something to tell the boys back home about. He even stops for a photo opportunity with you. Really, that actually happens.
The real fun comes after that when reports come in of the MT's attacking the Ixal in the North Shroud and this drove them to summon Garuda. Only for them to run in fear when it is "like our goddess, but is not out goddess!" as the Astral of the same name from Eos shows up, following the power of the King of Lucis to this shard from their own.

Honestly this fight is fun and its a shame we can't redo this one. Its a rework of the ARR Gardua fight but instead of using a close to the middle ring of stacked stones for cover you use an action move, in this case the blink strike from temporarily being given the power of a Kingsglaive from Noctis, and you blink around and link strike with Noctis for big damage. Honestly if i wasn't playing a RDM with Corps-a-Corps this probably would have seemed cooler than it felt but it was still pretty great.
You beat XV Garuda and she says Noctis passed this trial and its time to return home, just as Cid pulls up in a repaired Regalia. Noctis says his goodbyes and everyone gets a brief vision of a woman in white calling him home. He rides off into the sunset so to speak with a promise of 'lets meet again someday' and you end the brief side story with a new outfit, the Kingsglaive title and a trip to the Golden Saucer to drop 200,000 MGP on a G-Type Regalia for your troubles! 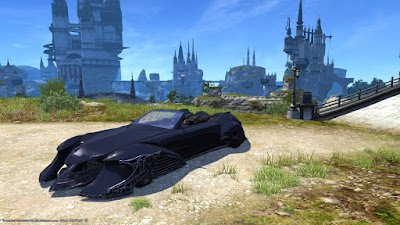 Overall i liked the event and i'm not even that big a fan of FFXV in terms of the whole series of mainline titles. It even made me contemplate reinstalling it to finish the DLC but not quite enough to bring me to do it.
I think in retrospect i enjoyed this one more probably because it was delayed. Because lets be real these cross overs are advertisements at the end of the day. They are to sell a product. This one was just stuck in dev hell much like the game its trying to cross promote so came at a time long after the games a current product on the new release shelf to be shilled. For Lightning, granted i cannot stand her character as Toriyamas tulpa waifu insert, the event felt cynical as it was right around the time Lightning Returns came out and so it felt more like an invasive advert getting in your fantasy MMORPG.
This like the FFXI events were years after the fact so were more of a 'hey i know that track' or 'they name dropped the thing, i know that reference!' type stuff that gets a smile and a prize. Personally i see the odd rare Lightning cosplay once in a blue moon but when did you last see anyone use the weapons from her event? years? ever? this feels like we will be seeing Regalias in regular mount rotation for a long time and the orchestrion music is already in the rotation at my Free Company house so clearly it did something right.

In general if i have one complaint its that the event made me want to play FFXV again right until a brief glimpse of Lunafreya showed up to remind me what an absolute mess of a game FFXV is and that its not really worth the trouble.

So yeah like i said at the start "A swing and a miss" with its intended purpose.

But points for trying though right?
Posted by Danny at 07:12