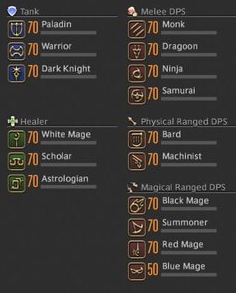 For like what 2 months? eh better late than never i suppose. I got through the Disciples of Hand and Land really fast thanks to collectibles. I was done before they even added the Namazu beast tribe in fact. Combat Classes however was a different story. I hit RDM, DRK and AST fast at the start of the expansion but really fell off and got most of the others through beast tribe dailies and the odd Main Story or Alliance Raid Roulette. In hindsight you spend too much of the expansion on alt jobs just rerunning Bardam's Mettle which can be a nightmare when the healers not able to deal with an overconfident tank bulling that entire winding path at the start in one run. It was a real easy recipe for alt burnout in a period with some great videogame releases. Hard Drive death aside of course.

So with all of them levelled, Job storylines finished and as geared as i want them to be here is a rough opinion on each before the big combat revamp coming with Shadowbringers:

Paladin: I know a lot of people that will swear by PLD. Its the bread and butter tank. The sword and board shieldwall that protects the party. It still is and it works just fine. Its also super boring. For me at least. They are visually boring, the quest story is boring and i left it last purely because i was doing this job for completionists sake and no other reason really. If you liked it in HW its still the same but does better.

Warrior: This job surprised me. I was never fond of WAR and it still does the worst first impression in beginner group content in my opinion. But nowadays? honestly really fun. The squishier tank but it holds threat very well and does a lot of damage to boot. They feel fast and theres a satisfying weight to their animations and this time the story was pretty fun. It was nice to see a different aspect to the whole Inner Beast storyline. I ended up tanking the most recently as WAR and never expected that back in HW.

Dark Knight: This one sucks but its lessened slightly by the very likely notion that this is the poster job of the next expansion and will get a rework to go with it. Because right now DRK sucks. It feels weak, the story around it is weak and you are just chasing one proc forever. This was my main Tank job in HW but now it just feels so inferior in mechanics, numbers and general fun that it feels like it got left behind.

White Mage: Boring but competent. The PLD of healers really. Everyone loves a good WHM backing them up, nobody goes "boy, i'm having such a good time playing WHM" though because its just 'bleh'. The lillies feel bland. You cast basically the same stuff you did in HW with no variance for the most part and thats about it. Its inoffensive but reliable.

Scholar: Tried some new things which made it more than the bubble healer with a pet but its just not as reliable as either of the others and its story is neat but beyond that theres a reason you don't see too many scholars nowadays.

Astrologian: Still my favourite healer no question. You can aoe, you can buff, bubble, dot, drop timebombs and so much more. The story is a very interesting look into Geomancy and the new abilities are a nice option to have during the times where your cooldowns ensure theres nothing to spend a royal road on. My go to healer job that is fun, visually distinct and the mechanics around the Tarot deck only got better in SB.

Monk: Great story that feels very tied into the Ala Mhigo stuff, the job itself however? eh kind of the same. It does high damage and has good survivability when solo but its very bloated and needs a look at from the ground up in my opinion.

Dragoon: DRG is 'if it aint broke, don't fix it' as a dps job. The story and mechanics add onto whats already there. It looks the same, plays mostly the same and if you love DRG in HW then the SB version will be right up your alley as well.

Ninja: This ones a bit of a sore spot for me. I mained NIN since it first came out in the Dreams of Ice patch in ARR and loved every minute of it right up to downing Niddhog and Alexander. Then SB happened and i was hopeful that the whole Doma aspect meant a lot of love for the far eastern job. Instead it feels like Samurai out and out replaced it. The story was bland and forgettable, the new jutsu ability feels more like a punishment than a power fantasy and it just flows worse than it did in HW and outputs worse damage. RDM replaced it as my main for a good reason: its not fun anymore.

Samurai: speaking of SAM this one took a while to grow on me. Its very much just building a combo for a buff, build one for aoe and build another for a finisher. Its simple. Its raw damage is high and when you have the full toolkit it does end up feeling like how NIN did in HW. The story was a little generic but its a Samurai story so of course they had to go the route they did with it in the Doma expansion.

Bard: BRD like DRG is another expanded but still competent job. It does what it did before but better and if you enjoyed it you still will. Nice story however and i did not expect this one to tie into Ala Mhigo as much as it did. Not too original but made me very nostalgic for ARR in its style and tone.

Machinist: Honestly i think the team doesn't know what to do with MCH. The new meter feels like filler. The new moves feel like filler and would you be surprised if i told you the story feels like filler? its not terrible and does the damage in a pinch but its kind of being left behind by the playerbase at large for a reason.

Black Mage: This was my original Job back in ARR pre NIN but HW changed it in ways that really soured me on it. Happily i can say SB really rebalanced it in a nice way. It still lacks mobility and seems to lag behind on single target fights but its the aoe dps king and the story this time around was pretty interesting and expanded more on the history of the job which too many others failed to do over the last few years.

Summoner: Another job like BRD or DRG that feels like a natural expansion of its core mechanics with a nice story to go with it. You really feel the new power tier when Summoning Demi Bahamut and while it feels like the job lost a little aoe capability to compensate it just feels so nice when you get the rotation down.

Red Mage: My new main job and easily my favourite both in terms of story and playstyle. The story of Amdapoori and Mhachi defectors and the revisit to the Weeping city were really interesting and memorable. The class blending melee and ranged while having healing to cover the raid when both healers die is a nice variety of options which keeps you on the move and always doing something even when theres nothing to dps. You heal, you buff the party, you raise dead players. All while building up spell meters to do a melee combo ending in a mininuke spell. Its simple, satisfying and while the dps might be a little low the support it brings to the party overall really makes it the most enjoyable dps job for me.

Blue Mage: While still stuck back at lvl.50 right now BLU is a very enjoyable job. I enjoy being able to heal, dps or tank in dungeons with friends and the scavenger hunt was a hoot with the story giving us a bit of info on the new world as well. It just kind of tapers off though and outside the carnivale' gets quickly forgotten by most. Very, Very fun job i would main in all content if i could but as it is right now its just a novelty to play with friends in ARR content.


So overall its a bit of a mixed bag. Most of whats good is just things remaining the same but expanded on and the bigger reinventions often didn't sit well with me. Jobs i liked i don't really touch and others just seem kind of left behind. Theres nothing beyond WHM i would consider truly torturous to play but it feels overall like there are less jobs i choose to play when i have the whole roster at cap to choose from at my leisure. I just feel like i varied a lot more back in Heavensward than i do in Stormblood.
Right now i can say concretely i'm going into Shadowbringers with RDM as my Main/DPS Job and AST as my Healer Job but thats about it. Will i start Tanking as WAR? will DRK get a huge revamp i love? or will GUN end up being a new Tank Job i adore? we can only wait and see but boy do i hope Yoshi and the team gives us more variance when levelling them all this time around because 1800+ levels in and another 200+ on the horizon i need something to start mixing this up beyond beast tribes and the roulettes!
Posted by Danny at 07:19