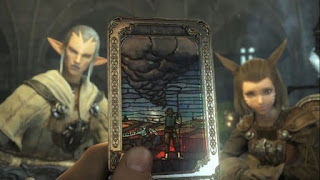 So there really is no better way to start this sort of thing that jumping right into it is there? So here we go.


"There and back again, a Hobbits tale by Bilbo ba-"


Hello. my names Danny and this is an attempt at a blog based around my experiences in the virtual world of Eorzea in Final Fantasy XIV. I have been playing since the launch of A Realm Reborn which very pleasantly surprised me after the horrid reputation 1.0 had online thus leading me to skip the experience. A reputation i was quite ready to believe after the "Decade of Lightning" that made up most of the Final Fantasy releases during the Playstation 3's lifespan which honestly soured my reaction to the brand for what had been quite a while by that point.

As you may guess from that comment i am a longtime fan of the series. Quite a big fan in fact (i even liked The Spirits Within and X-2, but don't tell anyone about that!) and one thing i always wanted was a Final Fantasy i could play with my friends growing up. I got this in a fashion with Final Fantasy - Crystal Chronicles which is a charming little rpg-lite party game on the Nintendo Gamecube, though sadly time passes and people have to move and you cant meet up to play local co-op games like you used to. Eventually Squaresoft -now Square Enix decided to make this fantasy a reality with the release of Final Fantasy XI.

While i did enjoy what i played of Final Fantasy XI when it came out i was far too young and impatient at the time for its more thoughtful, slow paced gameplay (though i would go back later and love the experience, cursing the years i missed where it was a more active player base) and quickly left it behind for a series of short jaunts in various MMORPG's of the time. Maple Story, Guild Wars, many korean F2P games most of whom have had their names swallowed up by the internet and history. Then being a fan of the RTS game Warcraft 3 i would settle on World of Warcraft for quite a long time. A fun experience but one that lost its original direction in recent Expansion Packs and in my opinion suffered too much from industry brain drain and eventually this lead to too many changes resulting in my experience no longer entertaining me so i sadly looked elsewhere. By that point a new release was generating some buzz.
Sort of. 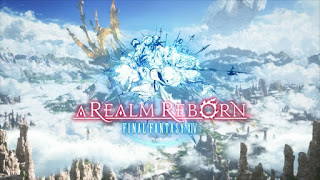 In an effort to resuscitate a brand badly damaged by a declining series of FFXIII sequels and the reputation of "FF 4.0" on XIV 1.0's part Square Enix announced they were effectively rebuilding Final Fantasy XIV from the ground up. Much of the staff would be replaced. Many of the mechanics would be changed and the world itself was going to receive a massive overhaul in order to prove the Final Fantasy IP still had legs in an age where even the most diehard of us longtime fans were beginning to drift away to other series like Persona or Tales for our Jrpg fixes.

I expected nothing much and my PC was too old to really give it a good shot anyway but i noticed they were accepting applications for a Playstation 3 Beta test so i applied figuring 'what the hell' and forgot it for a while.
-At this point i should mention that i am and have always been largely a console based gamer. I know theres always the sort that get their knickers in a twist over "pc master race vs console peasants" but i grew up on things like the NES and later the PS-One along with a series of Gameboys destined to be dropped or broken in some fashion, sorry Mum. So i have never been too comfortable with sitting at a desk playing videogames alone on a computer. I realise the irony saying that talking about MMORPGs like i am, but its worth remembering that consoles have always been my default to go to. The experience/crazyman ritual of sitting down with a controller in your hands and popping in a disc or cartridge is ingrained in me and is a vital part of the videogaming experience for me.
So naturally when i got the Beta invite to try a multiplayer, online Final Fantasy on my PS3 i jumped a the chance.

After a very long download and install riddled with errors and restarts i finally logged in at something like 2am to create a Miqo'te Lancer, like just about everybody else i assume given what i saw in the Beta and my experience was 'different' compared to past experiences as a Beta tester.
I dont just mean the game itself, thought it was wonderfully polished for a beta, no large checkered boxes that crashed the client if you looked at them in the vein of some Lovecraftian elder thing was to be found here. What was really noteworthy was the players. In particular the behaviour of the Players interacting with a quest in the little glade north of Bentbranch Meadows 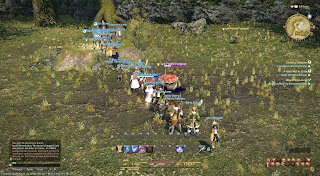 Credit to Lunamana on the FFXIV subreddit for this nostalgic screencap

You see a bug had shown up in a main story quest that blocked Beta progression. The infamous "Demon Stump" as it came to be known required a player to interact with a treestump to spawn a demon to fight, an early iteration of the Treant fight that introduces the first Scions for Gridanian beginners. However this could only be done by one player on the server at a time due to the aforementioned bug.
Now i mentioned my time with MMORPGs at this point was largely WoW-centric. A more.... volatile userbase i would say and this coloured my expectations to be a free for all shitstorm as players clipped into one many limbed mass trying to be the first to click on the event flag interaction trigger.
Surprisingly however this did not happen. Instead players formed a queue. Imagine that! Complete strangers in a videogame actually interacting in a mutually beneficial manner in a social way rather than as part of some mandatory game mechanic to access some carrot on a stick to keep going. This was madness! People were polite, talking about the Beta, sharing tips for classes and locations for item drops.

It was basically exactly what i wanted to see in an MMORPG after growing up watching shows like .HACK// and the sort of thing you see in all the modern shows and books like Log Horizon, Only Sense Online or Sword Art Online. That was when i thought maybe this was going to be something a little more special than 'just another WoW clone' like so many other MMORPG's had turned out to be between 2009 and 2013. Thankfully thats a trend on its way out even if XIV did itself turn out to borrow a few ideas from the former behemoth.

So a long story short i ended up purchasing the game both on PC and PS3. PC turned out to run terribly as i expected so i ended up stuck with the console version, though honestly i kind of prefer it if you have a keyboard plugged into the USB port for Party chat. Nowadays i have upgraded to the Playstation 4 for Heavensward and the experience is consistently better as you would imagine.

I began my time in Eorzea as a Black Mage (BLM) and was ready to "Get my Vivi on" with a wide range of Black Magic like all the Final Fantasy games. Sadly i was kind of disappointed in this regard. Remember i said some things were borrowed from WoW? well BLM basically ended up like a poor mans version of a Balance druid circa Cataclysm era WoW and the Summoner (SMN) was almost a straight Affliction Warlock clone, albiet the latter was still more fun to play.
This sort of meant i kept a sour undertone with my early experiences since the class i wanted didnt play like the class i wanted. That all changed however when SE updated the game with Patch 2.4: Dreams of Ice.

Being a Mage was cool, but who knew being a Ninja would be so much more fun? So much so to this day NIN is my main job in FFXIV and while Heavensward would bring jobs like Dark Knight (DRK) and Machinist (MCH) that i also currently have at lvl.60 -and in DRK's case is my only Tank i enjoy playing as- nothing quite keeps me entertained like the speed, skills and flavour of the Ninja Job.

As of now my time in game is mostly spent working on Relics, the current patch content and my favourite job focusses.

Ninja as DPS
Dark Knight as TANK
Scholar as HEALER
Miner and Botanist for farming materials
Leatherworker for crafting gear and melding
Blacksmith for desynthing weapons/tools for valuable items
and i am currently leveling Bard from 50-60 and finally starting to enjoy the class.

My MMORPG wants and passions include exploration, puzzles, finding secrets and exploring all the little sub systems that the regular player just in it for the raiding never stumble upon. Give me a world to live in and i am very happy. Sadly most MMORPG's fail in these regards but every patch Yoshi P and his team find something to keep me logging in and playing and after 2 years im still here and loving my time with it.

So join me and my character Kaz Nibelheim on this blogging journey of well meaning nonsense, wont you?
Posted by Danny at 08:56