So lets talk about a peddler from the New World 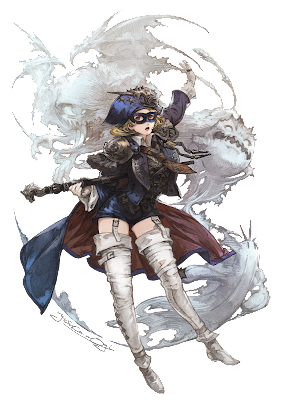 So allow me a minute to feel a little smug about this one. Since the rumours of it or RDM for Stormblood my theory on BLU and how it would work was constantly met with "thats stupid, you are stupid, they would never implement a class like that!".  However Fanfests announcements have come and gone and after waiting for the 4.5 special site to show up for confirmation i can whip out 'smug_anime_girl.png' in any forum argument over it with a great big 'told you so' on this one.

With that moment of smug ass behaviour i earned out the way lets get to Blue Mage and why i didn't shit out some heated reaction like so many other people i know over this 'Limited Job'.  So what is a 'Limited Job' in this regard?
Essentially it is a job with a specific focus or you could say 'market' of user. There have been MMORPG's in the past that to some measures of success or failure introduced new classes with a focus on being a pure pvp class, or a support in a game with nothing else outside the 'holy trinity' of traditional roles. Theres are intended to not be the endgame class for every activity and to not really excel in the same ways as others. Just to throw a twist in the mix and give players something to do as a fun alternative. Like how you can level by quests, fates and dungeons on an alt Job or if you want to just hit the Deep Dungeon train hard. Kind of.


Basically it goes like this: Next month when patch 4.5 drops a questionable looking trader will spawn somewhere in the 2.0 areas. He claims to come from 'The New World' which if memory serves has only been this strongly name dropped before by the Mamool-Ja in Wanderers Palace Hard Mode and is assumed to either be an analogue to the undiscovered Americas of the world or a reflection of Vana'diel in the same way our Ivalice is to the Tactics games setting. He has brought with him strange new Soul Crystals that confer a new type of magic neither White nor Black but one that taps into the aetherial abilities of monsters. Simply put 'Monster Magic'. For a price, as in Gil not some kind of Bloodpact mind you, one of these new sketch as fug Job Crystals can be yours. You get one starter ability and then its on your way as a new lvl.1 Blue Mage!

So pretty much this is mechanically at least exactly what i predicted. Like Quina or the Warriors of Light from FFV you go out into the world, fight monsters and some run ins give you the ability to learn some Monster Magic. Cactuar will give you 1000 Needles, Malboro/Morbol will give you Bad Breath and so on. Treated like drops some skills are common, some very rare and some inbetween. There are -to begin with at least- 49 skills out there to find. 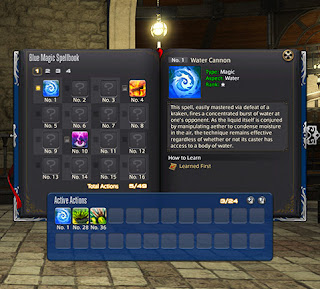 Once you have gained a skill it can then be dragged onto a cross role style set up to allow you to arrange up to 24 of those 49 skills to form a loudout of sorts to match the activity or simply your tastes. Maybe there is a situation where 'Lvl.5 Death' is super useful but close range skills are pointless? Maybe you are going to constantly be dropping in and dragging out Spells and Abilities for every kind of situation. Not that you will be doing every kind of situation mind you.
See this is what has some peoples jimmies all up in a rustle and i'll touch on that in a minute but the BLU mage is 'Limited' in the sense that it isn't a class you rush to 70 and jump into the final Ivalice raid with. In fact upon release they will be hard capped at lvl.50 with level increases coming during Shadowbringers. Perhaps this is so its not a balancing nightmare they dont need when it would just need the same again in 5.0's system wide combat revamp. Perhaps its never intended as something you take to endgame like the other three Mage Jobs at all? 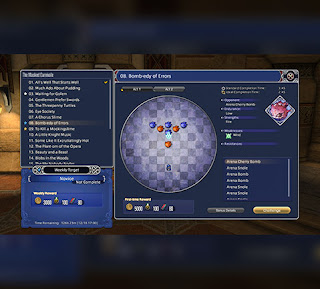 The only clear cut thing to go on from Yoshi and the team right now is this: The Job is going to have some ridiculously overpowered moves and will not be allowed in Party Finder. Period. Does this mean you will have to stick to PUG's for some content or you just cannot enter at all? Does this intended the class to be a way to get more life out of older content as a move hunting minigame? we just don't know. In some ways it almost makes BLU feel more like a combat version of a Disciple of Land Job than a traditional PVE MMORPG combat class. Not that you are just revisiting old content that is.
Announced with the Job is a new activity called 'The Masked Carnival' which they seem to be teasing as BLU specific Guildhests but lets be honest anyone who has played World of Warcraft from Mists of Pandaria onwards can recognise this: Its the Brawlers Guild. A enclosed single player PVE combat scenario with increasingly challenging bosses or combinations of enemies right out of the Olympus Tournament from Kingdom Hearts. I doubt it will be for everyone but after seeing the Brawlers Guild grow a fanbase and knowing how crazy the min maxers can get with things as simple as materia melding alone i could see this having some ridiculous speed run style competitions as people try to get the right combo of abilities and tactics down to shave time off the servers high score for a clear or something.

Now we need to talk about people, shock of shocks, being mad on the internet. 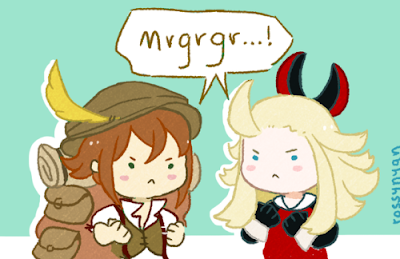 So fanfest ends its opening show and already the news that BLU won't be something you can speed to max level and jump into new content for has people ranging from mildly disappointed to what i can only describe as "Platinum Tier Buttmad". A whole lot of 'not a real job' and 'what a waste of time and resources' going around. Ranging from people from XI who have been waiting to retake their old main job as i did with RDM and finding for now at least thats not going to be the case to people who honestly seem made for the sake of it.
To a degree i can get it but at the same time this is a game with a job system y'know? You aren't being locked into BLU and being left behind. Just as i have all the crafters and gatherers maxed because i want to live out muh Log Horizon production class fantasy doesn't mean everyone wants to or has to. Like Chocobo breeding/racing, Lords of Veminion or Triple Triad BLU seems less like yet another dps job in a game thats really not starved for dps right now at all but a new minigame/sub activity and personally thats fine. For me at least.
Right now if i log in i need like 2 more yellow script items and i'm done with crafting. I finished Doma and the Namazu last night after taking it real slow so after completing the MSQ in the next patch my options are going to be BLU or Eureka WHICH APPARENTLY STILL HAS ANOTHER BLOODY AREA TO COME I FORGOT ABOUT?!? so you know what i'm going to do? I'm going to walk right by the Eureka npcs as usual and go pick up that BLU job crystal. Why? because it looks like fun. Does it suck for the people from XI who wanted their main job back? absolutely. I was worried when we first heard the leaks about RDM that it was just going to be a severely limited BLM in mechanics and thankfully its a Rune Fencer with Black and White magic and while not exactly the same i got my main back. For those who haven't yeah they should be as buttmad as they wish to be and more power to them.
The people otherwise who are still acting like the sky is falling? i say what i say when i recommend the game over its competitors: Your character is your account, not your class. You are never locked into anything so if BLU sucks its a shame but at best it cost you some gil and time. Thats it. If its great eventually its level cap will be increased for more content but who cares if its fun right now doing the 50 levels of stuff it has to do now? it honestly beats the SB 60-70 of "do you want to spam like 3 of the possible dungeons inbetween the daily roulettes? again? 14th times the charm right?" alternative right now. After a year of that yeah i'll go stomp around our ARR grounds on a BLU vacation till Shadowbringers.

Who knows, if its popular enough and can be balanced or given a 'locked in for duty finder content' rotation maybe 'Limited' wont be a prefix forever?

right now i'm excited for the job after enjoying it in multiple other games in the series and worst case scenario i don't care for it and simply don't take part in it longterm. Considering the fact it scratches my completionist/collector itch and offers a unique activity i'm going to guess its probably my kind of thing but who knows right? roll on January so we can all get our hands on it and find out!