Well this one actually snuck up on me. i've been real busy lately, hence why no post yet about 4.5 since you should know by now i save my opinions till i've seen everything and have yet to complete the Ivalice raid or the last few fights of the Masqued Carnival, so i'll get to that soon as i have more free time, but in my business i straight up forgot fanfest was today. So i was pleasantly surprised to be woken up by my phone going off with people sending me pictures of a certain someone i'll get to later.
Overall bit of a quiet fanfest in some regards, but last time was kind of a info dump blowout along with the CEO showing up to announce BLU as well. We got some confirmations, some clarifications and a bit more info but it feels like they are saving the last big hurrah for the JP fanfest which isn't surprising since thats the domestic market after all. But what we were shown was exciting and i have seen so many people i know go "so where do i go if i want to start this game now?" on forums and social media this morning so i guess Yoshi and the team sold it well.

First off we get the expected reveal of the extended teaser trailer as we did for Stormblood last time around. Not too much new stuff here but what there was was interesting.
We see Urianger as an Astrologian addressing Ysh'tola as Matoya while she appears to be a Black Mage, meanwhile Thancred gets a bit more where he outright calls the young girl Minfilia. Thats about it for new stuff but it does make me wonder: Are these even our scions at all?
Some fan theories lean to them being 3 from a dark future where we fail, others see them as counterparts from the Warriors of Darkness' world and maybe the guy in the trailer is not 'derplander' at all but Arbert from Heavensward who returned to his shard with Minfillia two years ago. Its interesting we are like 5 months away from release and we still don't know the story or setting of the expansion. New landmass, alternate shard or even a days of future past style dark possible future? we have no idea and personally i find that exciting. A big problem with MMORPG's is telling you everything before you go in, shame they spilled the Minfillia reveal in that regard, but i think that one was kind of guessed by almost everyone at the moment she was shown with Thancred.

Then we have the first Job reveal and would you believe its a Gunblade user, who could have predicted this shocking reveal eh?

Jokes aside the Job is called Gunbreaker. It is a Tank which starts at lvl.60 in Gridania and also unsurprising seems based on/inspired by Squall from FFVIII.

Its nice to get a new Tank. Personally i think we can go a little while without more DPS jobs. Theres some i want like GEO but they can't keep padding the dps gear lists on bosses and not giving the people that only tank or heal nothing. Hopefully Viera bring in Dancer as a healer as well. As for GUN i'm excited. My main tank job is DRK and thats probably getting a nice revamp but VIII was my first Final Fantasy and jank as its conflicting systems were i have a soft spot for it and i can't wait to throw on a gunblade and that Squall glamour set for a while!

Next up they move onto talk of areas, no Moon says Yoshi "maybe for 7.0", but we do see the Rak'Tika Greatwood. A clear analogue to the Golmore Jungle from FFXII. Home to a certain bunny eared people, wonder if they are showing up somewhere...

Its a nice enough looking zone but i wonder about both the ancient ruins that don't match any culture we know of and the burnt out buildings that look decades old at best. We still don't even know where this is. Is it on the edge of Dalmasca and its a burnt out imperial fort? or is this somewhen rather than somewhere and thats a familiar location after years of disrepair yet to occur? not in a video i can find yet was also 'Il Mheg. The more bright and Sea of Clouds feeling area home to the Pixie Beast Tribe who worship the Primal Titania. 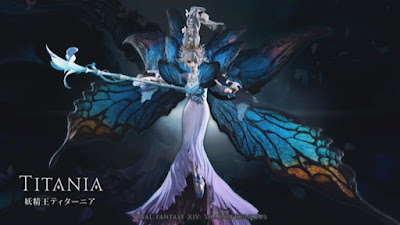 Someone people are quick to point out bears a certain resemblance to Allisae. The last, and really only caster Primal in XIV is Ramuh and that will be a full half a decade ago almost dead on by the time Shadowbringers releases which will be a refreshing change of pace. Its only on reflection you notice how many of the Primals are no more a caster than a King Behemoth casting Meteor is. Unless plumes Make Titan a wizard rather than beefed up Elemental? i mean maybe Lakshmi counts too but you just can't beat a giant boss with a staff raining spells down on you in a fantasy MMORPG can you and we've been starved of that for a while.

It got a little bit more bullet points in its pacing after this for a bit:

-The Battle system revamp will be revealed around May

-Trust NPC's are dungeon only, maybe too many made Fates a nightmare like ole' King Behemoth and the Chobobo issue back in the day?

Then we got the last two big bits of information. First off, surprising nobody we see the next playable race for FFXIV and if you played the current Alliance Raid content the race probably wont surprise you even if you missed the bugs bunny shirt at the US fan fest.

So yeah. Thats bunny girls alright. Guess now we know how the companies $133 million loss is going to be recouped. Hope they have the fantasia stockpiled. Shame Miqo'te will probably go the way of the Elezenn after this. Seems like a mono gendered race thus face but maybe they are saving something for the JP fanfest in a few months?

Finally after all that we get the last big surprise. There had been rumours of Yoko Taro, famed internet gif producing crackpot and tortured mind behind the 'DarkeNier' games, working on something Final Fantasy related since last year. People seemed to assume he was just being given the reigns to FFXVI after the attempts to make XV a strange 'jrpg as a service' that fell flat. Turns out he's working with the FFXIV team instead! 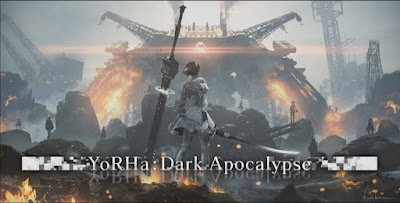 Yes thats real and not an early April Fools joke. The Alliance Raid storyline for Shadowbringers is going to be written by Taro and be a Nier story. For some this is a gross level of cross over that kills their immersion and its gotten some people upset. Personally i have been a fan of Taro's games since the buggy but memorable mess that is Darkengard/Drag on Dragoon and while i love Automata a lot the original Nier Replicant/Gestalt is the rpg i wanted from Square during the PS3 generation that i got while games like FFXIII were massive let downs. Taro's storys defy traditional rpg conventions and are often about loss, morality and the choices we make that are rarely the same kind of basic moral quandaries rpgs throw at their protagonists and more, in his own words, 'if you believe you are doing the right thing then you can do great evil for the most selfish of reasons' and maybe that thinking really resonates with the core story of Shadowbringers? 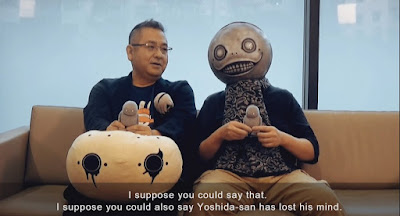 All i know is Taro is jrpg equivalent of a Hideo Kojima level Auteur and i cannot wait to see what we get out of multiplayer Nier content. A bit bigger than the Lightning Returns style fate people asked for an expected all of last year huh?

So with that the shows over. One more fanfest before the expansion releases and we know more but we still seem to know so little outside of the mechanics/features side. Which to some is probably frustrating but personally i hope they don't just blow their load and give us a massive reveal of all the story like they did with Stormblood. I remember the ending to A Realm Reborn had people in a mad panic and all we knew was "we go to Ishgard on the lamb" and it made things feel more like an adventure than another tier of levelling content. Hopefully we get that back again as Stormblood seemed to lack that feeling of 'mystery' and has not kept people as interested as Heavensward did. So i really hope this is a return to form in that regard. Beyond that i'm super excited, all the more so with Taro doing work for the project so bring in June!