A little something to cure what ails you

Valentiones Day has come around once again and while the usual stories of ooey-gooey love and longing are the norm for the Seasonal Quest and the return of its 2 player Puzzle Dungeon -which is the kind of design i wish we got more of as a regular kind of side content, though maybe its once a year nature grants it some charm?- and you know the gist of it by now. You do the dungeon, get your chocolate hearts and turn then in for some decorative housing items.

See this year they are trying something different, its easy to miss -most folks i know did- but something i'd like to see more of. See you would be forgiven in thinking that its just some lame tabletop items for your house, because you totally want to be "That Guy/Girl" that decorates their house in valentines stuff all the time like some form of Crazy Coeurl Lady in training right? 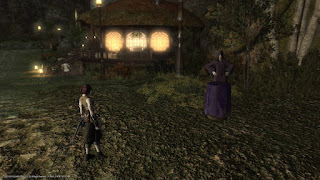 A more observant player might notice that there are quite a few npc's around this year, including the fortune tellers from the super awkward "form a couple with other players for romantic fortunes" event thats now been retired. Difference is theres now a new addition to the event. To the left of the Mih Khetto's Amphitheatre Atheryte Crystal there is now a shading looking "Furtive Fortune Teller". A crotchety old woman who gives fortunes for the people wandering around alone in full "tfw no virtual gf" mode. After a brief cutscene she mentions that she has concocted a "Magical Elixir" for these lonely times and for the low price of 999 Gil you can purchase it for its unique properties. You are going to want to purchase two of them. 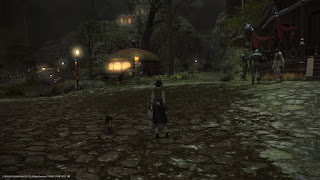 Next take the Aetheryte to the Lancer's Guild and follow the path up the hill to a closed gate. Look to the rear balcony of the small building on the left to see a curious new addition to the location. A "Magical Pot" imp monster right out of the Labyrinth of the Ancients. 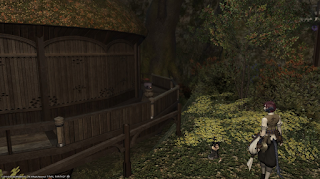 A jump over to the balcony will let you talk to the Imp. It will demand Magical Elixirs from you and turns out to be a unique secondary vendor for the event! Instead of chocolates from the couples quest it takes these bitter drinks from the loners instead and what does it get you? 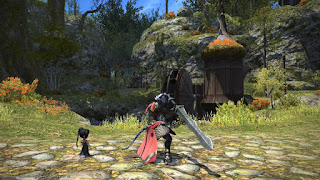 You get a Gigas Greatsword, the giant blades used by the Gigas that roam the crystal wastes of Mor Dhona and a Tonberry Knife for Culinarians. Two weapons used by lonely monsters known for bearing grudges like a curse. How anti-romantic!

The event should have ended by now but due to the server issues with Eureka causing all instances to crash they have kept the event live till the 19th so even if you don't care about the actual valentine couples stuff theres now an extra 4 days to get these items in this 'secret quest' as well!

Personally i love stuff like this, even if i hate that i can miss it as a completionist. I was just showing a Sprout player around who was lost and on my way back to the Atheryte noticed the new NPC. To see an NPC and go on a little exploratory jaunt that ends in finding a secret vendor for unique weapons that will be gone -outside of the mogstation no doubt- is a really cool thing you only really see in MMORPG's from a bygone era for the most part and it was a really nice little thing to stumble upon. So while the info in this article will be useless a week from now its still a nice thing to talk about and i hope we see more of these 'secret quests' to stumble on in the future. Honestly i would love to see some Limited Jobs get this treatment in the future, can you imagine how fun/frustrating that kind of scavenger hunt would be?
Posted by Danny at 04:59