Well i let this sit for a while rather than vomit out a word salad like a fair number of places i visit in the last week or two. All in all this fanfest has been an interesting one. We have an expansion name and rough release window, but we don't know where or even when its set. We have a new job, but we don't know what its for. We have new mechanics, but we don't know when we will be using them.
Its not like people are upset, its just a lot more vague and i imagine some of that is because they dont want another thing like the previews to Heavensward that spoiled the absolute shit out of the shocking twists at the end of A Realm Reborn. I guess its just an unusual feeling for FFXIV to know about content, but also to know comparatively little when put up against the fan fest reveals of Heavensward and Stormblood.

So anyway. Shadowbringers. Guess the leaks were legit thus far huh? What we know however is pretty slim. The trailer shows the highlander going through all his jobs from 1.0 Archer to 4.0 Samurai/Monk while talking about becoming the warrior of Darkness. We see Thancred with a Gunblade, perhaps as the rumoured Soldier job escorting a young girl and -something which i feel people haven't really touched on that seems important- both Thancred and the warrior of light are being attacked by Amdapori constructs. Last time we saw them was when the magic levels in the ruins of Amdapor were going haywire and the SB Summoner questline where you find out Kuribu was in part connected to a summoning ritual rather than just being an animated statue. I can only imagine the latest patch talking about the aether being drained out of the land is related to this. Beyond that very little story. We know Zenos/Elidibus will be the final big bad of Stormblood so thats no spoiler. It was nice to hear Sokens theme since Uematsu is on a break but on the whole it was a great teaser trailer that ultimately tells us very little and thats weird but new content is new content so thats that announced.

Now we come to the quickfire info: 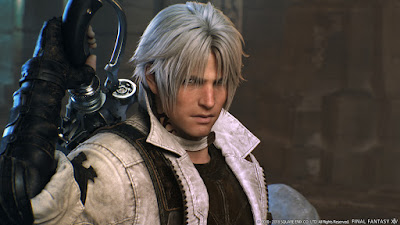 "Multiple new jobs coming in the expansion" - Strange thing here being that BLU was announced, i'll get to it later, and thats not coming in the expansion. Its a patch job for Stormblood. So whats coming in Shadowbringers? we know a Gunblade user is confirmed but aside from that? nothing. Just 'multiple jobs' and with the leak suggesting Blue Mage, Soldier and Dancer maybe multiple just means two in 5.0 and Dancer is coming later and Soldier uses a Gunblade? who knows. Personally i'm hoping SLD is a tank and DNC is a healer as we have enough dps for now and could use more tanks and healer jobs for variety. Lots of mmos treat tanks and healers like second class customers and give them one new job every 5 or so years in general and it would be great to see FFXIV give them some more love. 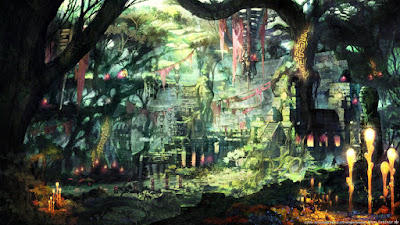 "Level to 80 in all new areas" - Big question here was "where?". We have new zones listed. The Rak'Tika Greatwood which looks extremely similar to a locations from FFXII and is home to a certain race of note in that game and Amh Areng which is a destroyed castle dotted landscape similar in appearance to the final area of Dark Souls 3. Apparently a new culture, well a new old dead one that is, but beyond that we know nothing. Where are these zones? are they even connected to each other? we simply don't know anything more about them at this point. New areas are always exciting for me regardless but its odd to see an MMORPG expansion reveal without a big "and we're going to [BLANK]!" during said reveal. Maybe its Thavnair. Maybe its undiscovered parts of Aldenard. We just don't know right now. 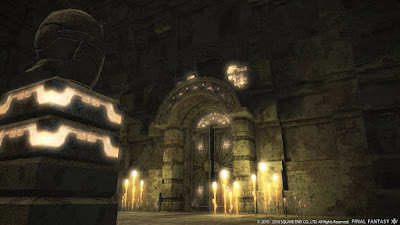 "9 dungeons at launch and new raids and alliance raids to follow" - nothing too shocking but 9 is a solid number to start with. It feels like you only really do Sirens Song, Bardams Mettle and Doma Castle before cap nowadays in SB and the lack of variety really makes levelling alt jobs a bit boring so variety is very welcome. Big question is whats the raid storyline this time? theres no Alexander or Omega set up thus far and we don't have many large tier bosses from previous games to dust off in this regard. These speculation of time travel in this expansion so maybe it comes in there, but i feel that could just feel like Alex again even if its not clockwork and gobbos. 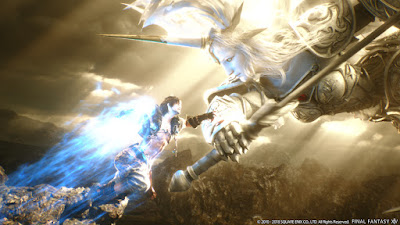 "Take the war to Garlemald while averting the greatest Umbral Calamity of all and become the Warrior of Darkness" - This ones interesting. I wasn't expecting Garlemald so soon and the trailer makes it hard to tell if we are the hero's or the villains of the story. Perhaps the Kuribu style entities are attacking to defend something rather than be mindless monsters attacking the player? When we were warned of 'the world being destroyed in overwhelming light' does that mean a straight up army of light aligned constructs like the amdipori creations? 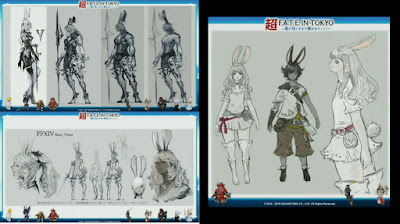 "Nu Mo beast tribes, a familiar face from XII showing up in the final Ivalice raid and a new playable race" - So Nu Mo from 12, a certain character thats a 'fan favourite but not balthier' in the next patches raid and a race teased by a Bugs Bunny shirt? Hmm. I wonder what that could be? (yeah we all know its Fran and Viera, get ready for SE to make back those recent losses on Fantasia alone!). Overall its nice to see Ivalice love. Hope the rumours of 16 being a return to that setting but viera being the last race isn't that surprising. In terms of archetypal FF species they are really the only none beastial one left that could wear current gear models. 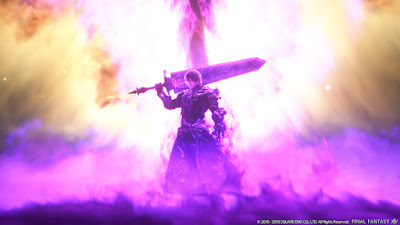 "TP is gone, freeing up the GCD and DRK getting a rework" - TP is interesting. Were it at the end of HW it might seem a bit more dramatic but considering a lot of the gauges are good for so little i can easily imagine those reworked to be a resource gauge like how RDM uses it for its melee combo attacks. As for DRK? well i've not had much issue with it right now as a casual tank but the people i know who main it and only tank have barely played Stormblood because they hate the class. Apparently thats quite common and we all know what happened to PLD and WAR in the past and with Shadowbringers looking like the DRK expansion as the current is SAM/MNK and the last was DRG/PLD leaning who knows how big the changes will be?

All in all it was some interesting stuff but nothing too breath taking. There are a couple of other things i will talk about in other entries to break this up but we all know it ended with a bit of a surprise thats left people 'mixed' in terms of reactions, shocking for the internet i know, but i'll get to that at another time. For now its more FFXIV and we have 4.5 on the way and thats also promising to make Stormblood go out with a bang so exciting stuff all around, but a bit more vague than usual and Yoshi alluded thats clearly for good reason. We just gotta wait for the next fanfest to see what it is!