No i'm not making a pun about the 'I'm Blue' song. 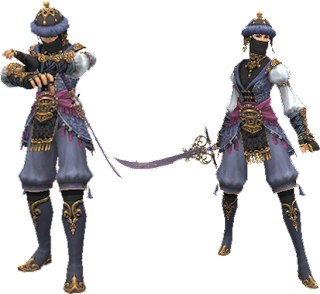 But lets talk about the Blue Mage Leak/Rumour anyway. According to said rumour not only is Blue Mage or BLU one of the Jobs for the next expansion but it will be a preorder bonus of sorts and will become available to players who prepurchase the game. Sort of like how Blizzard did with the Demon Hunter Class for World of Warcrafts Legion expansion.

So first off what is a Blue Mage? Blue Mages first appeared in Final Fantasy V as a new option alongside the traditional Black, White and Red. While Black was damage, White was healing and Red was a weaker blend of the two Blue Magic was essentially a form of mimic magic. In Most examples of the Job -even times like in FFIX where it was never actually given the name- the Blue Mage does not learn their skills from a mentor or a tome but by experiencing it themselves. Most often from Monsters. Fight a monster that uses the regen spell White Wind? well you can use 'copy' or a similar skill to learn it should you defeat the monster and you keep the spell forever. Notable examples being the Warriors of Light in V, Quina Quen in IX and most popular with fans Khimari Ronso in X. As a notable side thing the rumour also states Ronso are a playable race in 5.0. Perhaps they are the more tribal mages who created Blue Magic while the Amdapori and Mhachi worked on Black and White magic? 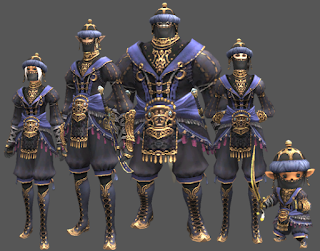 So how did that work in an MMORPG? in FFXI Blue Mages showed up as a Job in the Treasures of Aht Urghan expansion. They were basically elite anti monster tanks, trained to become a monster themselves and take in the essence of powerful monsters while struggling to combat their "inner beast" lest they become a mindless force of destruction themselves. To any WAR's reading this i'm sure the concept sounds familiar to a degree.
In gameplay terms they were a close combat, tanky mage. They had a few basic attacks and buffs to power up Blue Magic but by and large their focus was on -shock of shocks- utilising Blue Magic spells to deal damage and resist damage. Crazy i know! But unlike other mages they were regarded in two ways. Physical spells were close range, impactful magic. In XIV terms think something like a RDM's Enchanted Rapier Skills. Then Monster Magic or Monster Affinity Magic. None impactful stuff more connected to elemental abilities. For example you might fight a crab and learn a water element spell. Just like a conjurer casting Stone or Water. The big deal for BLU was how you got them.
Monster Magic is acquired by defeating, or being in a part with allies that defeat a monster using the skill you want. You just need to be a BLU and not get KO'ed while doing so. You them, based on level have a number of BP or Blue Magic Points you can use to spend on a hotbar of skills from your library of skills. Basically imagine the cross role spells of XIV but with the mod mechanics from Warframe. Have 8 BP free for your last slot but Bad Breath costs 10BP? too bad you dont have the points even though the slots open.

Now how would i implement this in XIV?  Essentially i would use job quests to give the core skills and the hunt log to point you in the direction of what you can get skills from. I know they kind of want the hunt to replace the hunt log but it just seems like such a perfect fit. You leave your early town and can get your stun from the jellyfish outside Limsa Lominsa for example. You just take the hit, beat the monster and bam. Now your spell list has a monster magic spell to add onto your BLU specific version of the cross bar. Simple. Kind of.
I would make it a tank myself since magical cloth tank is a really neat idea, maybe give it evasion based stuff and use NIN gear? but knowing how popular dps are in online games over tanks i could see it becoming another BRD or RDM. I wouldn't care for it as a RDM main who already heals and res'es players in raids with no desire for another supportive mage job but you never know.


A lot of people think the leak is legit and honestly i wouldn't be unhappy to see BLU added to the game. It could fit with the Ronso and we all saw last time around the demand for it is really up there in terms of FF jobs yet to show up in game but honestly i also wouldn't be upset if it didn't show up this time. I can take or leave it.

What about you? excited for it? worried it wont be the role you want?

What kind of BLU do you want to see in FFXIV?
Posted by Danny at 06:58