Beyond Heavensward part 3: RDM and its possibilities 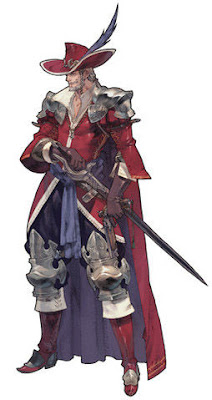 Fan Fest has come and gone and amongst all the reveals for Stormblood no bit of news has had people talking more than Yoshi P's shirt alluding to Red Mage being one of the jobs in the next expansion.
It could be a troll on his part and we are getting BLU or something instead but assuming RDM is soft confirmed the question remains: what kind of Red Mage will it be? because unlike jobs like Black Mage or Ninja RDM is a job that has had many incarnations in the Final Fantasies games and its spin offs. So lets take a look at a few possibilities for what could be the next Job you unlock in FFXIV!

Possibility #1: The "Vanilla" Hybrid. -  A true hybrid. Another Mage that uses a sword but still is largely based on rank 1 and 2 BLM and WHM spells. Listed in games past as a "Jack of All Trades, Master of None" but ultimately in MMORPG terms not really exciting enough to warrant the resources for balancing, designing and so on for what is always going to be 'the not as good at its job' Mage.
Likeliness: Not at all likely

Possibility #2: The "Mix master" Hybrid. - Seen more often in spin offs an titles like Bravely Default/Second this from of Red Mage is similar to #1 however as well as using low level BLM and WHM spells they can combine them to make new options eg a Fire 2 which afflicts the enemies caught in the blast with a damage over time fire damage spell. Could be an interesting way to let players take what they know in a different direction. Though ultimately in terms of time spent vs output its again not different enough to be a new MMORPG job in a game with BLM and WHM already.
Likeliness: Not likely

Possibility #3: The Swashbuckling Dandy. - Most fondly remembered from Final Fantasy Tactics and Final Fantasy XI this form of Red Mage is a melee fighter. Using a Rapier, a Rapier and buckler or Dual swords this flavour of Red Mage is a swordsman with a musketeer meets colonial frontiersman theme. Fighting in close quarters and buffing/debuffing based on en spells currently used in game by all breeds of Beastman tribes this brand of Mage would still be using BLM/WHM spells but in different ways. Instead of casting Fire to damage an enemy you could cast En-Fire to light your rapier aflame and deal additional fire damage or use En-Water to increase your speed and add a hp regen. Still using the BLM/WHM spells in name but in an entirely different way. In previous talks about RDM Yoshi P stated "it will come should we ever add a support role" and assuming PS3 being dropped allows for far more engine updates its not impossible that BRD,MCH,RDM and others yet to be revealed could become a 4th role as support. With MCH being a ranged physical support and RDM being a close combat magical support.
Likeliness: Very LIkely

Possibility #4: The Tanking Mage. - The wild card of the lot since most agree that if they ever add a Mage tank then BLU would take the role. Never the less the image of a rapier and buckler with limited healing and damaging magic does have the beginnings of a possible tank role for Red Mage instead. In FFXI a RDM with a NIN sub job became a popular tank build for solo'ing group content out in the world of Vanadiel and some are wondering if the same may happen again now to balance out another sword and board tank against the two two hand tanks and one sword and shield type we have now. A magic tank could be the breath of fresh air tanking needs however the team has said Samurai or Beast Master may be more likely to take the role next and as mentioned BLU inspired by characters like Raubahn feel like they could pull off the defensive up front mage far better.
Likeliness: Possible but not expected


So thats the 4 possibilities doing the rounds right now. A lot of it based on assumptions of what the upcoming expansions 'combat system overhaul' will be but for we can only judge on what works in game, what roles are still unfilled and what doesnt overlap too much with others.
My personal opinion is that RDM is going for the Fencing support type and like NIN will be played less for straight DPS but for its utility it brings to a fight. Though bare in mind RDM was my first job in FFXI so with some experience of a FF MMORPG version of the job already working that may colour my expectations some what.

What are you expecting for RDM in Stormblood? New range? new role? or riding the Swashbuckler train right to the station?

We should know by the Japan Fan Fest but its always fun to speculate. Personally i cant wait, new Jobs are what brings me back time and again and i know i am not the only one.
Posted by Danny at 07:46