3702. Thats a small number in terms of MMORPG playerbase numbers in any regard. Unless you are Wildstar i suppose. In XIV however thats pretty damn small. After all its the 2nd biggest sub MMORPG after World of Warcraft. Thats not small numbers is it? but in comparison 3702 certainly is. 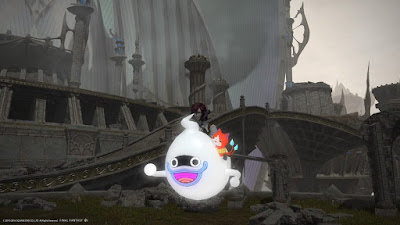 See the census is in and if you happened to complete the Youkai Watch event, which has recently finished and its rewards can no longer be claimed, then you are one of 3702 players worldwide that has gotten that above pictured Neon Nightmare that is the Whisper A-Go-Go! mount. So yeah, savour that exclusivity i suppose.

You could wonder why but i think its rather obvious isn't it? It was the grind of it. People saw the increasing number of Legendary Youkai Medals required and the rough estimates of around 1700-2000 Fates to attain enough -personally i think it took me around 500 so either they upped rates or those estimates were waaaay off the mark- and people were simply scared away from it. 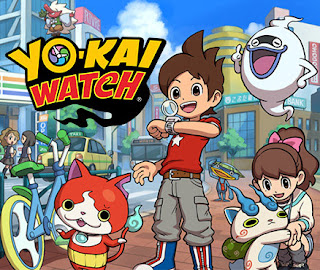 That and it probably didn't help that Youkai Watch has been something of a dud in the West. At the time of writing the second game has been announced but compared to its "This could be the replacement for Pokemon!" reaction in Japan the western reception to Youkai Watch has been largely unnoticeable. It released to no fanfare or critical praise, review scores didn't exactly suggest anything groundbreaking and the sales were pretty low. Perhaps the roots in Japanese folklore being more prevalent than the Pocket Monsters more eased in folklore roots just has no appeal outside its native region? Regardless this was a tie in event for a game in the west that is already being forgotten as the 3DS reaches the end of its life cycle and Pokemon Sun and Moon is really the last big hurrah for the system and choosing between Youkai Watch 2 and that isn't going to be a hard choice for anyone under the age of like 30.

So thats the thing though right? Its not a Square Enix title, its not a title popular in the west and there must have been enough data from the Anima Relics at that point to suggest people at large have tired of the grind heavy nature of Heavenswards none story content. So why put it in at all for us? theres other regional things we have missed. Every MMORPG has them. For years completionists in WoW were haunted by the images of a Gold Pig pet on their forever incomplete pet lists from a China only Coca Cola promotion for example. Lots of events are region specific in online games. Hell back in my teens i was way into Maple Story and that actually had region specific zones! So why add Youkai Watch to western servers at all?

Simply put? Filler. Of course there is the fact that our server divides are a lot less important than other games where regions are locked and you must rebuy a different version of the game to play in different regions but even with that in mind i believe the event as a whole was not just an advertisement for a 3DS game that had long since released in Japan and somewhat bombed in the West. I think it was a good way to try and give players a time consuming activity in one of the largest dry periods in the game to date. Did it work though? ehh kind of. I breezed through getting the Minions in a weekend and then ended up getting a couple of weapons a week over two months after the fact. In objective terms all those fates got me a lot of exp. for alt Jobs i am still levelling and the insane number of Grand Company seals bought enough maguffins for multiple Hyperconductive Relic quests to be completed when the nerf hit.

I can't exactly say this was a fun experience however. It was basically equivalent to leveling Miner or Botanist for me. Throw on a podcast or a Lets Play video on my Laptop and watch/listen while mindlessly grinding enough fates hoping a coin would drop till i had enough and left it for a few days and then repeated till i was done. It wasn't exactly hard, or even that tedious. It was mediocre and inoffensive but ultimately not fun or that rewarding and i just did it because it was a dry spell and i am a completionist. Its over, i got one of 3702 copies of this mount and years from now people will say "dude where did that ridiculous mount come from?" and will probably sigh and make some comment about 'a lot of hours wasted thats where' and thats really all you get from this event. A few neat weapon Glamours aside that is.

Ultimately though i don't think i will miss this event like i have missed some of the others including the FFXIII ones and i cannot stand Lightning at all. Its over and i got all the rewards. Checklist complete right?

Though when its said and done the amount of people i saw regularly venting how "This has actually put me off buying Youkai Watch and i was planning to before this!" might be suggesting that this event may in fact have had the opposite of the desired effect for this brand exercise. Can't win em all i suppose.

Still with this out of the way and the Unidentified step nerfed the game is once again lacking a big grind outside of the Umbrite. Which just makes me worry whats in store for the next Relic stage. Thats a ways away though and for now i can relax and finish leveling up my last few crafters and combat jobs before the expansions over.

Till the next grind hits that is. Which i will complain about but i know i'll do it. Gotta chase that shiny carrot and all that.
Posted by Danny at 02:49