-Which may also be a Vento Aureo reference, but in this case a little more of the RDM variety.

So. Stormblood. Its real. Its the expansion and it is coming in summer next year. Surprisingly still not for Xbox One, unsurprisingly however it is not coming to the Playstation 3. Square Enix is finally dropping support and as of the day of patch 4.0 attempts to load the game on PS3 systems simply will no longer work.
The good news however is from today till December 31st PS3 owners who have yet to upgrade will be able to do it now completely free of charge, including collectors editions. Which compared to Bungies "we will give you a bit of a discount but you need to give us more money" approach is very nice, though for a sub game i suppose it all evens out in the longrun.
Its a little sad to see the PS3 era end. To know the copy on my shelf is now just a disc with no use which is odd since i still have my "Vanadiel Collection" of FFXI and its first two expansions i can reinstall and play any time -for now at least- and it feels like the last vestiges of 1.0 are being put to rest in a way. Its officially a PS4 game now with a last gen version running on borrowed time for a few more months. Thats a strange feeling. Though with the PS3 hardware being around 12 years out of date it is a necessary thing. Last gen was the longest console generation in history and while graphics are entering a period of diminishing returns for increased polycounts the background numbers need more power to simply do more things and the PS3 was really holding the game back development wise, hell they are even suggesting you abandon 32 bit OS's on pc as well at this point. Hopefully this means bigger events, bigger areas and jut more freedom to add or change new systems.

Speaking of changing systems how about that "battle system overhaul" eh? half the internet thinks the games turning into Tera and the other half think its going back to FFXI like either of those will ever happen. Personally i think the dropping of the PS3 allowing for larger background changes means we are finally getting a 5th dungeon party slot for supports. Being BRD, MCH, RDM and maybe DNC. Since Yoshi P has mentioned RDM before and said "when we add support jobs" and lo and behold he made a big deal and taking off his hoodie and showing everyone his Scarlet Witch shirt this Fan Fest which isn't exactly the most subtle way of saying RDM confirmed as he did with a Batman shirt for DRK last time around. If RDM is support then at least 3 jobs could be considered as such which is equal to the number of current healers and could justify expanding the party system to incorporate a 4th role people have been desperate for since 1.0.
Beyond that all we know is that the Ui is now going to change 'based on Job' which may mean something similar to many UI mods for World of Warcraft that allow players to change their windows and menus to suit the theme of their class e.g a Druid has wooden looking windows with leaves around the border or something. Accuracy may be gone completely for Healers and cross jobs skills will now be a set list for each role to cut down on clutter and usless abilities. So if you are a tank you can select provoke wether you leveled up a Gladiator enough or not.

Part of this overhaul comes from the new level cap of 70. Which is gonna be a doozy if they increase the exp requirements too much, i still have 3 combat, 2 crafting and 1 gatherer below 60 and while not super hardcore im not exactly the most casual player either. Doing it all again is going to be a slog if it is a huge exp jump. Still with new levels comes new abilities and since this game is reportedly almost 50% PS4 users this raises concerns for button space on a Dual shock 4 to say the least. So they are taking a hard look at skills like featherfoot and armour piece to see if they would be better served as passives instead of an off GDC filler button that takes up space.
For those of us that came from WoW which became a victim of its own ability bloat leading to overzealous pruning, class homogenisation and extremely bare bones class identity by the time i and around 48% of the userbase quit all this news is a little worrying i'll admit. HW classes feel like they are in a good spot right now (even if i think PLD at any level is dull as can be) and the idea of a huge shake up is worrying since this happened a few times before in WoW and one day a class you loved would simply not play at all the same way anymore and it was no longer something you enjoyed playing which sucked to put it mildly. For now all we can do is wait and see. 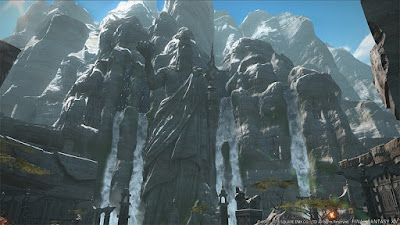 Story wise its no surprise that this is a story heading into Ala Mhigo to help the Stormblood rebels fight off the Galean Empire. This time around the MNK job will be the focus as DRG was to Heavensward and so far we have seen a soft confirmation of Red Mage and some things suggesting Dancer and a hard confirmation of multiple jobs in the expansion. The new High Legatus enemy Zenos Yae Galvus suggests Samurai so thats also being talked about but i'm still on the fence with this one.
The new hub will be the Rhalgr's Reach which should sound familiar to anyone who levelled a MNK in ARR and looks like a larger, more ornate version of little Ala Mhigo where the forests of the Black Shroud and the deserts of Northern Thanalan/Paglth'an meet so right from the hub the choices of areas seem to be very north or south verdant or sandy in nature to choose. However the concept and live in game dev video showed areas of woodlands, swamps, deserts, mountains and sea. One image has been pointed out as bearing an uncanny appearance to the haunted woods from FFVI where players fought the Ghost Train which as you can imagine has players excited. 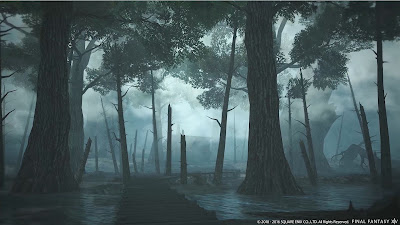 The new areas will be connected to Gridania via Gyr Abania and Bealsars Wall that has tantalised players since 1.0 will finally be breached leading into a swampy region that is now just as filled with Garlean constructions as Ala Mhigan ruins. The Garlean Empire has been in control for 20 years. Many have acclimated to them and the children dont know anything life but one under the heel of the Empires rule. The Stormblod revels however remember when Ala Mhigo was "The Shield of Eorzea" and want to route the Empire from their lands and retake their homeland for themselves and all the refugees stranded in Thanalan.
So basically what everyone expected really. Not exactly a huge surprise but a necessary step in the story and a chance to restore the human capital? i imagine Hyur players will be really engaged with this since i can't name another mmo where Humans have no land of their own to call home and i'm sure that resonates with the players. 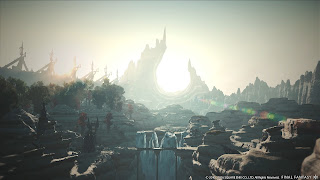 Outside of the story and new Jobs we have Eureka, the Forbidden Land a more exploratory and 'jump in friendly' Diadem 2.0 with world bosses, Notorious Monsters and will possibly be used for the 3rd XIV Relic instead of grinding tomestones, which would be nice. To grossly understate it. Along with new Primals (Doomtrain and Magus Sisters are my guesses) and "At least as many zones as Heavensward" and flying is making a return along with the aether system used in Coerthas/Dravania.

Overall Fanfest gave a lot of announcements but not too much concrete information with Yoshi P stating "if i dont save some stuff for the JP and EU fanfests they will kill me" and promises a bunch of new reveals in live letters and even in game in the next two months. Personally i am thinking Yda will be given a more prominent role in Heavenswards final patches and Alisae will be revealed to be a Red Mage which naturally would raise the question "Red Mages are not Sharlayan Magicians so where in her travels over the last few years did she learn the art?" Perhaps she will introduce us in the next patch to the future RDM class trainer? or perhaps in XIV Red Mage are brand new and she is the first and will herself be our teacher?

Stormbloods reveal has left us with a lot of speculation and food for thought, but over the next couple of months a lot more infos going to come in, for now all the internet can do is speculate and wonder.

But thats always half the fun isn't it?
Posted by Danny at 05:57